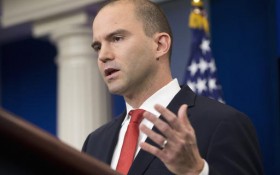 The White House on Monday worked to contain the damage caused by one of President Barack Obama’s closest aides, who, in a seemingly candid, behind-the-curtain magazine story, ripped the Washington press corps, boasted of creating an “echo chamber” of supporters to sell the Iran nuclear deal and appeared to dismiss long-time foreign policy hands, including Hillary Clinton, as the Blob.

Deputy national security adviser Ben Rhodes’ comments to The New York Times Magazine have sparked a mix of bewilderment and outrage in Washington’s political and policy circles. While some marveled at a savvy White House aide’s apparent eagerness to discuss what some consider the ugly sausage making of modern governing, other noted he’d kicked up a hornet’s nest of a debate over whether the White House oversold the legacy-burnishing deal to curb Iran’s nuclear program.

The article revived criticism of the agreement. In a statement issued Monday, Sen. John McCain, a long-time critic of the Iran pact, said the piece “provided a troubling glimpse of the White House spin machine that has put sustaining ‘the narrative’ above advancing the national interest.”

The piece portrays Rhodes, Obama’s top foreign policy speechwriter and arguably one of his most influential aides, as singularly in tune with his boss’s thinking and narrowly focused on crafting a messaging machine to support it. It quotes Rhodes lamenting the ignorance of Washington reporters. (“They literally know nothing.”) And it describes Rhodes, a former aspiring novelist, as focused on crafting a storyline and dismissing facts that don’t fit.

Rhodes appears to try to keep secret news that Iran had seized 10 U.S. Navy sailors until after the president’s State of the Union speech. The article quotes Rhodes and his aides describing how they used social media, journalists and friendly interest groups to disseminate White House-generated talking points about the Iran deal.

“We created an echo chamber,” Rhodes said. “They were saying things that validated what we had given them to say.”

Rhodes sought to soften the remarks on the website Medium. A post late Sunday included something of an overture to reporters he’s dismissed, saying the Iran deal had been well-covered and debated. He wrote that he didn’t try to dupe the press or spin Washington.

“It wasn’t ‘spin,’ It’s what we believed and continue to believe, and the hallmark of the entire campaign was to push out facts,” Rhodes wrote. “These were complicated issues.”

Still, some experts involved in the debate said they recognized the hard sell described in the story.

David Albright, a physicist and arms control expert with the Science and International Security in Washington, said he was surprised to see a White House official “opening up this can of worms again.” The intensity of the debate over the Iran deal left many in the arms control and policy world bruised, not the least because of the White House’s take-no-prisoners approach, said Albright, who was briefed by the administration during the negotiations and remained neutral on the deal.

“It was, ‘Are you with us or are you against us?'” Albright said, “The White House was looking for sound bites that beat the opposition, not necessarily sound bites that captured the truth of what was going on. I wish they were just putting out facts. They exaggerated and overstated to sell the deal.”

Not all saw the tactics described as anything more than good public relations in the social media age.

Initial reaction to the piece within the White House was good — Rhodes last week retweeted a Twitter follower’s compliments, and as the story circulated on Facebook it piled up ‘likes’ and glowing remarks from former White House aides.

In a sign of Rhodes’ popularity and position in the White House, the piece quotes a who’s who of White House figures, including chief of staff Denis McDonough, United Nations Ambassador Samantha Power, former Obama adviser David Axelrod and former CIA director and Defense Secretary Leon Panetta. National Security Adviser Susan Rice was interviewed for the piece but not quoted.

By Monday the White House was playing defense. White House spokesman Josh Earnest told reporters he had never heard Rhodes describe the foreign policy establishment, including Clinton, as the Blob, as the magazine describes.

Earnest has said Rhodes’ concern about the timing of the disclosure of seizure of the sailors in January was primarily about the sailors’ safety — not about concerns that the news would interfere with the president’s speech. He said he was certain Rhodes would recast his description of the Washington press corps.

“I assure you that’s not how it was intended, and based on that reaction I’m confident he would say it differently if given the chance,” he said.