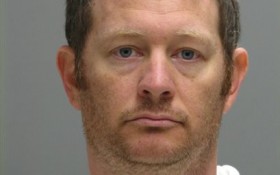 While he was working security at the White House, a uniformed Secret Service officer was also trying to solicit a teenage girl for sex and sending obscene images and texts online, according to the charges against him.

His arrest is the latest embarrassment for the agency charged with protecting the president and his family.

Lee Robert Moore, 37, of Church Hill, Maryland, was to appear at a preliminary hearing Friday in Delaware on state charges of sexual solicitation of a child under 18 and providing obscene material to a person under 18. He is charged separately in federal court with attempted transfer of obscene material to a minor.

Moore surrendered to authorities in Maryland on Monday after being caught in an undercover online sex sting by Delaware State Police.

His arrest brings new scrutiny to a federal agency already reeling from a series of scandals stretching back to 2012, when more than a dozen agents and officers were implicated in a South American prostitution scandal. Since then, multiple agents and officers have been accused of wrongdoing. Former agency director Julia Pierson was ousted last year after the disclosure of two security breaches, including an incident in which a man armed with a knife was able to scale a White House fence and run deep into the executive mansion.

According to a complaint unsealed in federal court Thursday, Moore often engaged in online chats while on duty at the White House, once asking an undercover officer who he thought was a 14-year-old girl to send him something “exciting” on a day when he was checking IDs for a building entrance and complained that “work sucks today.”

It was not immediately clear whether Moore has hired an attorney.

“The Secret Service takes allegations of potential criminal activity extremely seriously,” the agency said in a statement Thursday. The Secret Service said Moore’s security clearance was suspended on Nov. 6, the same day the matter was reported to its Office of Professional Responsibility.

According to federal authorities, Moore reached out in August to an undercover detective posing as a 14-year-old girl on the social media application “Meet24.” They subsequently agreed to communicate using the social media app “Kik,” which allows the exchange of images and videos.

“Moore soon moved the chats sexual,” Detective Kevin McKay wrote in an affidavit. “He stated he wanted to travel to Delaware and meet in person for sex. Moore made it clear that he knew I was a 14 yr old girl.”

The affidavit, as well as the federal complaint, go on to describe communications that Moore allegedly had with undercover officers, including sending graphic photos.

On Nov. 8, after being told he was being placed on leave and ordered by the Secret Service to report to a Maryland State Police barracks in Centerville, Moore sent a final message to the female undercover trooper.

“I don’t think we should talk anymore,” he wrote.

According to the federal complaint, Moore admitted after being taken into custody that he had taken and sent the explicit pictures. He also admitted that he had communicated with other “Meet24” users he thought to be minor girls.

“In particular, Moore stated that he had an (sic) sexual interest in 14 year-old females and had engaged such individuals in online chats about sexual matters,” wrote Patrick McCall, a special agent with Homeland Security Investigations.