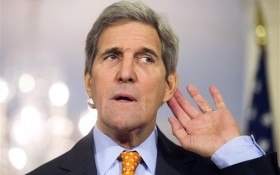 Secretary of State John Kerry will face skeptical senators when he appears before a Republican-led panel just a day after the United States and Russia agreed on a new cease-fire for Syria.

Kerry is scheduled to testify Tuesday before the Senate Foreign Relations Committee amid nagging questions over enforcement of the truce and how violations of the agreement will be handled. The cease-fire is to go into effect Saturday.

Congressional mistrust of Russia runs high on Capitol Hill and is sure to color the hearing. Sen. Bob Corker, R-Tenn., the committee’s chairman, said he has no confidence Russia would abide by the cease-fire agreement. “I have a series of questions about our relationship with Russia and what we really expect them to honor and do,” Corker said.

Sen. John Barrasso, R-Wyo., said he is very doubtful about anything that Russia agrees to in Syria. “The Russians continue to say that they’ll still go after terrorists, but that’s a very elastic term,” he said. “They’re going after anybody they want. I don’t trust them.”

The timeline for the truce comes after the United States and Russia, backing opposing sides in the conflict, agreed on terms for the “cessation of hostilities” between Syrian President Bashar Assad’s government and armed opposition groups. Five years of violence in Syria has killed more than 250,000 people and displaced 11 million more from their homes.

The truce will not cover the Islamic State extremist group, the al-Qaida-affiliated Nusra Front and any other militias designated as terrorist organizations by the U.N. Security Council. Both the U.S. and Russia are still targeting those groups with airstrikes.

Even if the cease-fire is implemented, the fighting and violence in Syria won’t stop.

Despite the agreement, Russia is almost certain to continue an air campaign that it insists is targeting terrorists. But the U.S. and its partners said Russia is mainly hitting moderate opposition groups and killing civilians.

While IS tries to expand its self-proclaimed caliphate in Syria and neighboring Iraq, al-Nusra is unlikely to end its effort to overthrow Assad. The Kurds have been fighting IS, even as they face attacks from America’s NATO ally Turkey. And Assad has his own history of broken promises when it comes to military action.

In congressional testimony two weeks ago, Director of National Intelligence James R. Clapper said Russia’s campaign in Syria “has eclipsed its aggression in the Crimea and Ukraine as the most serious flashpoint in U.S.-Russian relations.”

“Unlike Russia’s obscured hand in Ukraine, its actions in Syria are being played out in daily headlines that report on Russia’s indiscriminate bombing and its support of the Syrian regime in areas where moderate forces are aiming to get out from under the rule of the Assad regime,” Clapper said.

As objectionable as Russia’s involvement in Syria is, the only prospect for peace is through a negotiated cease-fire, humanitarian relief and a serious attempt at a negotiating a political resolution, said Sen. Chris Coons, D-Del. That approach is “far preferable to our deploying tens of thousands of American troops in an attempt to move the balance of the battlefield back against Assad,” he said.

Kerry’s appearance before the committee was scheduled before the Syrian cease-fire was reached. He will also discuss the State Department’s fiscal year 2017 budget request, a $50.1 billion package that includes programs to counter IS and other such groups, address climate change and respond to humanitarian emergencies and peacekeeping missions.