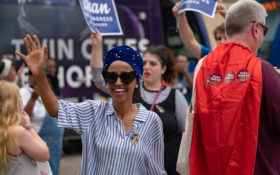 Rep. Ilhan Omar’s, D-M.N. message to the American people has been clear for quite some time now.

She doesn’t exactly think highly of the U.S., but that didn’t stop her form running for Congress and representing the nation.

What does she think of the average American? In her own words on Tuesday, Omar said that many parts of the country are ignorant.

A fed-up group of New Yorkers decided it was finally time to give her and her fellow Democrats a dead serious message.

Hundreds of Jewish-American protesters crowded Times Square in the heart of New York City to rally against the congresswoman’s inflammatory remarks. The activists condemning Omar, a group called Ilhan Must Go (IMG), formed after her hurtful comments on 9/11, when she belittled the attack and reduced the horrifying crime down to some people who “did something.”

It was a gross trivialization.

So one activist, Joe Diamond, decided to do something about it by forming the IMG.

“This woman is an ardent anti-semite, and she doesn’t even try to hide it,” Diamond told The Jerusalem Post.

Sponsored: How to ace your next blood pressuretest: do THIS 30 min before

“In my lifetime, I cannot think of any other politician who presents a bigger threat to the alliance between the U.S. and Israel and to America’s Jews,” he said.

The group had originally planned to unveil a giant billboard for the protest, but was denied by the Democrat-controlled city because the board was “disparaging,” according to JPost.

But the activists refused to be silenced.

Not only do the protesters want her to go home — they want her removed from office as fast as her fellow U.S. officials can do it. And if the Democrats don’t budge? They’re threatening a plan to continue flipping the once-blue districts into Republican control in 2020.

President Donald Trump already laid out the blueprint as to how to do it.

After all, the protesters did rail against Omar and Democrats in NEW YORK CITY, a notoriously blue city in a blue state… not to mention Rep. Alexandria Ocasio Cortez’, D-N.Y. hometown!

Could groups like IMG be influencing a GOP takeover in deep blue turf?

Hundreds of Americans gathered in Times Sq to send @thedemocrats a msg: @Ilhan Must Go! Off the FA Cmte!

If she isn’t removed, & Jewish Reps remain silent their seats won’t be safe in 2020. Silence is complicity & the Dems seem to have placed their bet on the antisemitic horses! pic.twitter.com/KbdarvT3Bs