NYC to allow men in women’s bathrooms - The Horn News 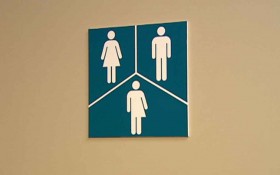 Welcome to New York, where restaurant owners will no longer be allowed to require male diners to wear ties and gyms can’t tell men to get out of the women’s locker room or bathroom.

They’re even trying to control business owners and employees’ free speech. Violators that call a woman “Ma’am” when she prefers “Sir,” could face up to $250,000 in fines per violation.

The guidelines apply to many businesses, landlords and employers. Public schools already have their own, somewhat similar rules.

Groups representing restaurateurs and landlords didn’t immediately respond to inquiries about the new provisions, nor did a major fitness-center chain.

Besides overall bans on discrimination in housing and hiring, the new guidelines forbid such specifics as balking at using the personal pronoun of someone’s choice — “Ms.” or “Mr.,” for instance.

The rules also declare that transgender people can’t be denied access to the restroom or locker room where they say their gender identity belongs, determined at the transgender person’s sole discretion.

Objections from fellow patrons or employees that feel uncomfortable dressing or using the bathroom around the other sex “are not a lawful reason to deny access,” the guidelines say.

New York’s rules also address topics ranging from health coverage to employee dress codes. They needn’t be reduced to one unisex outfit, but a business can no longer require suits for men, for instance.