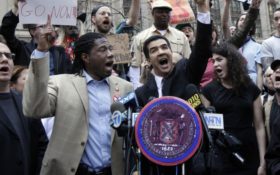 The protesting took a nasty turn when these two liberals were arrested for blocking an ambulance.

It is a beautiful thing when karma is survived up to those who deserve it the most.

Williams and Rodriguez gathered a group of ignorant liberals and blocked a busy street in New York City. Their protests was against Trump and ICE over an illegal alien activist being held for deportation.

Shockingly, these two idiots are going to soon find out how much their cries for freedom are going to cost them.

They were handcuffed and arrested for blocking an ambulance from being able to make its way down the street. Watch the video here —

The acts of these two men are utterly disgraceful. It shows the truth behind what really matters to the Democratic Party — they have no concern for suffering Americans.

Reportedly, Jumaane was happy with how his protest went and he was proud of himself for the theatrics that he had caused.

An individual inside that ambulance could have been dying and that person is someone’s loved one. The leftists are full of pure hatred.