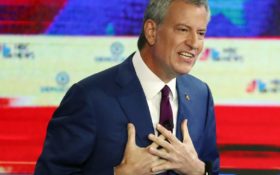 New York’s Democratic mayor is facing serious heat for being in Iowa campaigning for president while Manhattan was in the grips of a major power outage.

While Bill de Blasio’s residents were suffering without power, he was touring Iowa — part of his 2020 presidential campaign tour.

Now, de Blasio, already under enormous amounts of scrutiny from New York City residents, is facing mounting pressure to be removed from office.

Critics on social media also took their frustrations out on de Blasio.

“This picture will be trouble all week for NYC mayor Bill de Blasio,” one Twitter user wrote.

This picture will be trouble all week for NYC mayor Bill de Blasio. https://t.co/3X7XPIBs67

Even ESPN anchor Keith Olbermann took a shot at de Blasio’s handling of the situation.

90 mins into #NYCBlackout Pitch perfect @BilldeBlasio, who is apparently still mayor here (though I can’t confirm that), is still MIA, apparently out on his vanity campaign. https://t.co/LtHUqUvLu5

While de Blasio was in Iowa, New York residents took it upon themselves to try and stabilize the chaos that the blackout caused.

Some residents even helped direct traffic:

For the last 45 minutes this man has kept the intersection alive. @CoreyinNYC @BilldeBlasio this is New York pic.twitter.com/gO4BzWjDtf

During an appearance Monday on MSNBC’s “Morning Joe,” de Blasio insisted that the blackout response was well-managed with his remote supervision. No injuries were reported from the blackout, he said, noting that power was back on within several hours.

“It doesn’t matter where you are, you’re in charge of your team and making sure people are executing a plan,” said the mayor, who is seeking the Democratic nomination for president. “The important thing is to get the right people into the right place.”

De Blasio said he took a four-hour car ride from Iowa to Chicago and got on the first available plane home.

Cuomo, speaking on public radio Monday morning, said he would leave it to the voters of New York City to pass judgment on de Blasio’s response, but added that “there’s no substitute for firsthand information and firsthand knowledge” during an emergency.

“People want to see their leader on site, in charge, in control, and it makes people feel more confident,” Cuomo said. “There is no substitute for showing up.”

Cuomo ruled out the suggestion, raised by The Post’s editorial, that he use his authority to remove de Blasio from office.