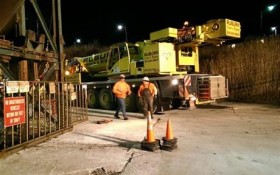 Seventeen miners stuck 900 feet underground at the deepest salt mine in the Western Hemisphere were rescued Thursday morning, ending a frantic ordeal that officials said began about 10 hours earlier when an elevator got stuck on its way to the mine’s floor.

Mark Klein, a spokesman for Cargill Inc., said the last two miners were hoisted to the surface at Lansing, NY mine — located in the central part of the state — around 8:30 a.m.

Klein said the elevator — large enough to accommodate a forklift — got stuck around 10 p.m. Wednesday while descending to the floor of the 2,300-foot-deep mine at the start of the miners shift. Emergency workers were able to communicate via radio with the miners, who had blankets, heat packs and other supplies lowered to them.

Temperatures in Central New York dipped well below zero overnight and this morning.

The mine, which Klein said is the deepest salt mine in the Western Hemisphere, produces road salt that is shipped throughout the northeastern United States. The mine is located on the shore of Cayuga Lake and extends beneath its waters.

Mining at the Lansing site began 100 years ago. Minneapolis-based Cargill bought the mine in 1970 and today employs 200 workers at the operation, Klein said.

“While we hope to never make use of that practice, it’s helping us today,” he said.

Mining operations will be shut down for the rest of the week as company officials and federal government mine safety inspectors investigate what caused the elevator, one of several at the site, to malfunction, Klein said.

“We want to take a step back, check things out,” he said.