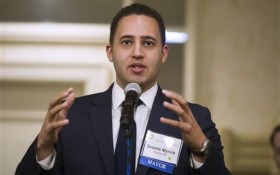 The mayor of Ithaca in upstate New York wants his city to host the nation’s first supervised injection facility, where heroin users would be able to shoot illegal drugs into their bodies under the care of a nurse without getting arrested by police.

Canada, Europe and Australia are working to reduce overdose deaths with these facilities, but in the United States, even the idea of creating supervised injection sites faces significant legal and political challenges.

That has to change and quickly, said Ithaca Mayor Svante Myrick.

“My father was a drug addict. He split from the family when I was 5, 6 years old,” the mayor, now 28, explained in an Associated Press interview. “I have watched for 20 years this system that just doesn’t work. We can’t wait anymore for the federal government. We have people shooting up in alleys. In bathroom stalls. And too many of them are dying.”

Myrick said he will ask New York’s Health Department to declare the heroin epidemic a state health crisis, which he said would enable his city to proceed without involving the state legislature. Myrick told the AP about his proposal ahead of a wider announcement planned for Wednesday.

Once dismissed as a radical idea, injection sites are increasingly being discussed as a possible response to huge increases in overdose deaths nationwide. In New York state, overdose deaths involving heroin and other opiates shot from 186 in 2003 to 914 in 2012.

Ithaca alone had three fatal overdoses and 13 non-fatal overdoses in a three-week span in 2014, prompting city officials to begin looking at alternatives to simply jailing addicts. The city of 30,000, which hosts Cornell University and Ithaca College, is considered one of New York’s most liberal communities and is a prime candidate for new approaches, Myrick said.

The mayor said this facility would be staffed by nurses or physicians who could quickly administer an antidote if and when a user overdoses. But addicts also could get clean syringes and be directed to treatment and recovery programs — part of a more holistic approach that deals with addiction more like a public health issue than a criminal justice problem.

Spokesmen for the Department of Health and Gov. Andrew Cuomo didn’t respond Monday to the AP’s request for comment.

Canada’s first injection facility opened in Vancouver in 2003. Every day, 800 users visit, and between 10 and 20 of them overdose each week, but no one has ever died there, according to Dr. Patricia Daly, chief medical health officer at Vancouver Coastal Health, which operates the “Insite” facility.

“These overdoses are completely reversible,” Daly said. “People die because they inject alone.”

Insite receives the bulk of its funding from government now, but faced significant initial opposition from officials in Ottawa. A 2011 Canadian Supreme Court decision ordered federal officials to stop fighting the facility, noting that it has saved lives “with no discernible negative impact.”