Nuns vs. strippers in courtroom drama - The Horn News 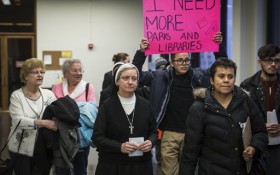 A convent in suburban Chicago plans to move forward with an effort to close a neighboring strip club even after a legal setback.

Cook County Circuit Judge Peter Flynn on Tuesday told the Missionary Sisters of St. Charles Borromeo to rework their lawsuit against Club Allure in Stone Park alleging it violates prostitution regulations and is a nuisance. But Flynn also dismissed claims that the club violates zoning laws.

He asked the nuns’ lawyers to provide specific, detailed examples of nuisances or lewd behavior.

After the hearing, Sister Noemia Silva said her order is called to “protect our values, and we will not change them.”

Attorney Robert Itzkow, who is former owner of the club, says it’s a legal business.