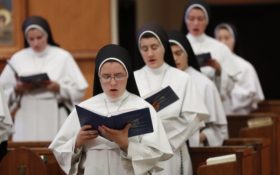 The members of Dominican Sisters of Mary, Mother of the Eucharist, silently filed into the chapel. Within minutes, they were singing — first in unison, then in a transfixing, layered harmony that reverberated off the marble floors, wood-paneled walls and cathedral ceiling.

The evening prayer service was intended for no audience but the Lord they have taken vows to serve. Still, The Chapel at the Motherhouse on the rolling grounds of the Catholic order’s campus outside Ann Arbor, Michigan, is also the place where the members record music that has been heard by millions. Their third and latest album, “Jesu, Joy of Man’s Desiring: Christmas with the Dominican Sisters of Mary,” has gracefully muscled its way to the top of Billboard’s classical chart and climbed nearly as high on the holiday chart.

They may be sisters, but this is no act.

“It’s such a part of our prayer life that when we make a CD, we’re just praying,” said Sister Joseph Andrew Bogdanowicz, a founder of the community who has overseen the production of three CDs. “It’s what we do, it’s who we are.”

The album’s 16 songs span from the 5th century to present day and represent the music of 10 countries. The collection includes the well-known (“We Wish You a Merry Christmas,“) obscure (“Sleep, Little Jesus,” based on a Polish carol) and original (“Snowflakes,” composed by Bogdanowicz). Some songs are a cappella, others contain light instrumentation — all supplied by the sisters.

For them, the music is a gift to God, but also to people who can’t see the sisters perform live. They don’t tour, and only on rare occasions do they sing in public or on national broadcasts. Their evening services at the Motherhouse are open to visitors on Sundays, but space is limited and those are structured prayers, not performances.

“We want them to have this beauty, and that’s the only way we can do it,” Bogdanowicz said. “It can even be in another country or part of the world or somebody who doesn’t even have a clue who we are but if they’re quietly listening to this and it’s elevating them towards God, then God’s done everything we wanted him to do.”

The unconventional recording artists got their start in the music business a few years ago, when the sisters were approached by Monica and Kevin Fitzgibbons, music industry veterans who founded DeMontfort Music and attended the sisters’ service known as “Vespers.” The label specializes in sacred music produced by “hidden communities,” and the Dominican Sisters of Mary’s latest album is distributed by Sony Music Entertainment.

Some time and prayer, not surprisingly, was necessary, but a spiritual match was lit.

“My thought was, if we’re going to do it, we need to do it well,” Sister John Dominic Rasmussen, also a founder of the 20-year-old order that started with four sisters and now has roughly 130. “The team that came here and approached us — just from my conversations I knew they would be able to do it well.”

Rasmussen oversees the business side of the sisters’ musical projects, and she comes by it honestly: Her mother was a country music publicist in Nashville, Tennessee, working for major record labels and then independently. Growing up around the industry has helped her understand some of its language and logistics.

Her mother attends a weekly breakfast meeting of music industry people, and Rasmussen recently tagged along. She wanted to share a video of her sisters performing, so she turned to a longtime TV show host.

“I said, ‘Let me see your iPhone,’ and I called it up and showed it to him,” she said, and soon, others grew intrigued. “They’re like, ‘This is beautiful, let me see that. … We got to promote this.’ My mom’s like, ’We’ll get ‘em for everybody.’”

“When you love what you’re doing … you want to find every moment to bring people you know to that experience,” she added.

While the sisters live a structured, contemplative life, they recognize the importance of engaging with culture. Their primary mission is that of education — they teach preschool through college at private schools across the United States — and making and sharing their music is a natural extension of that.

“If (people) only hear bad music or see ugly art, how are they ever going to know the beauty of music or the beauty of art or the beauty of the universe?” asked Mother Mary Assumpta Long, mother superior of the Dominican Sisters of Mary. “It’s all in education — you have to expose them to beauty and goodness.”