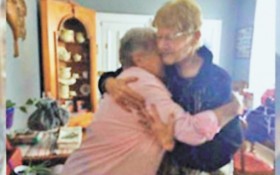 Two Pennsylvania women say the pre-Christmas discovery that they’re sisters is nothing short of a holiday miracle.

The Progress in Clearfield reports 78-year-old Barbara Smith, of Pottsville, and 77-year-old Sandra Fitzgerald, of Apollo, met for the first time on Sunday. They hugged, shared stories and laughed.

Fitzgerald’s son-in-law was studying genealogy when he discovered Fitzgerald had a sister. The two women had the same mother, but relatives adopted Smith. Fitzgerald, who was born a year later, was adopted outside of the family. She says she hasn’t slept since her son-in-law told her the news.

Smith says she always thought she was an only child. She learned about her sister three days before Christmas.