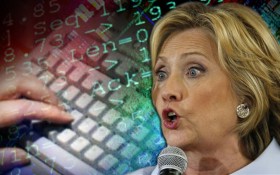 This could be Hillary Clinton’s worst nightmare come to life: A foreign hacker who gained access to some of her most sensitive government documents may be talking to the FBI.

Insiders believe this may be the turning point in the FBI’s extensive investigation of Clinton’s alleged misuse of government secrets by storing them on a private email server kept in her home.

Fox News is reporting that world-famous hacker Marcel Lehel Lazar, known as “Guccifer,” has been extradited to the United States – and a source close to the investigation told the network that the timing, which comes as the agency is turning up the heat on Clinton and her allies, is “not a coincidence.”

The 43-year-old hacker is believed to have broken into an email account belonging to Clinton confidante Sidney Blumenthal. He was reportedly able to read emails between the two and examine shared documents – including potentially sensitive information related to Benghazi.

A journalist who interviewed the hacker last year said he boasted of uploading some emails to the cloud, including a few that have never been seen publicly.

And that means right now he has some serious leverage.

“He said he was expecting to collaborate with U.S. security services when the time is right,” journalist Matei Rosca told Fox. “Presumably that would be now.”

Lazar is so eager to start talking that he waived extradition to get here quicker, and according to The Smoking Gun has even boasted that this entire investigation is “because of me.”

If nothing else, the emails could prove Clinton was criminally negligent in failing to protect highly sensitive documents.

Despite the fact that the investigation keeps hitting closer to home, Clinton claims she’s not worried and insists she won’t be charged.

“There is not even the remotest chance that is going to happen,” she told NBC’s Matt Lauer on Friday. “Look, they’ve been after me, as I say, for 25 years. And they have said things about me repeatedly that have been proven to be not only false but kind of ridiculous.”

She’s making it sound as if this is the infamous “Vast Right-Wing Conspiracy” she’s been complaining about since the 90s – shadowy Republican figures out to destroy her.

But it’s not the GOP going after her in this case.

It’s the FBI, which has stated publicly that the investigation into her email scandal remains “active” and “ongoing.”

The FBI is an arm of the Department of Justice, which is an executive-level agency with a director appointed by the president of the United States – in this case, Clinton’s fellow Democrat, President Barack Obama.

After nearly eight years in office, Obama has had ample time to remake the agency in his image, filling it with liberal cronies. If Clinton is indicted, as many expect, she’ll have a hard time pretending it’s because she’s a victim of a Republican vendetta.