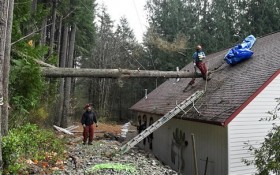 Well over 100,000 customers remained without power in Washington state Thursday after a powerful storm killed three people and prompted an emergency declaration from the governor.

Gov. Jay Inslee declared a state of emergency Wednesday for all Washington counties, clearing the way for state officials to increase aid to those with storm damage.

Winds on Tuesday exceeded 100 mph in some areas of the Inland Northwest.

Fallen trees blocked streets and slowed commutes in Spokane, and officials asked people to stay home and off roadways if possible.

Allen Kam, with the National Weather Service in Seattle, said rain last weekend may have saturated soil, making it easier for the winds to topple trees.

Avista Corp. on Thursday was still trying to restore power to some 105,000 customers, most in Spokane County and northern Idaho.

The utility said customers who lost power Tuesday should be prepared to go three to five days without electricity. Crews were expected to work around the clock until service was restored.

“This is the largest crisis Avista has experienced in the company’s 126-year history,” the company said in a news release.

An estimated 700 miles of overhead power lines were damaged by the wind storm, the company said.

In Portland, Oregon, an 80-year-old woman spent the night trapped in bed after a tree fell on her home and missed her by inches during the wind storm.

When firefighters arrived, the woman told them she had a few scratches but wasn’t hurt.

Public schools were closed in Spokane on Wednesday and Thursday.

Puget Sound Energy said more than 30 transmission lines were badly damaged and about 100,000 customers were without power early Wednesday. That number had dropped to about 11,000 by Thursday morning, and the utility said most customers would regain power by the end of the day.

Floodwaters had started to recede on Western Washington rivers by Wednesday afternoon and King County closed its flood warning center.

Firefighters and police rescued two women trapped Wednesday evening in high water after they ignored a road closure and drove into standing water near Bellingham.

Wind gusts around 100 mph rattled areas west and north of Denver, blowing snow from Tuesday’s wintery storm across roads and knocking out power.

The storm dumped over a foot of snow in some parts of the Plains and winds created snow drifts several feet high.