North Korea: We have the world's most powerful weapon - The Horn News 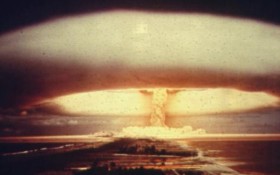 If the claim turns out to be true, it would represent a massive leap forward for a country which supposedly developed it’s first nuclear weapon in 2009, and comes at a time of heightened tension.

A hydrogen bomb is more powerful than a standard atomic bomb, as it relies on fission to detonate a secondary, fusion explosion.

It’s called a thermonuclear reaction, and uses the energy produced from the splitting atoms from a nuclear bomb and then forces together atoms. Essentially, it is an atomic bomb within an atomic bomb.

Following the announcement, the North and South Korea governments held high-level talks Friday at a North Korean border town, a small step meant to calm a region battered by a military standoff in August and decades of acrimony and bloodshed.

Analysts say quick improvements in ties are unlikely because the rivals remain far apart on major issues, such as Pyongyang’s nuclear weapons ambitions and the broad economic sanctions the South has imposed on the North since 2010, when Seoul blamed a North Korean torpedo for a warship sinking that killed 46 South Koreans.

Analysts have said cash-strapped North Korea might seek the South’s commitment to restart joint tours to its scenic Diamond Mountain resort, which were suspended by Seoul in 2008 following the shooting death of a South Korean tourist there by a North Korean soldier.

“There are a lot of issues to discuss between the South and North. (We) will do our best to resolve them one at a time, step by step,” said Hwang Boogi, South Korea’s vice minister of unification and the head negotiator for the talks, before leaving for Kaesong.

In August, the two sides threatened each other with war over land mine explosions that maimed two South Korean soldiers.

The Korean Peninsula remains technically at war, because the Korean War ended with an armistice, not a peace treaty.