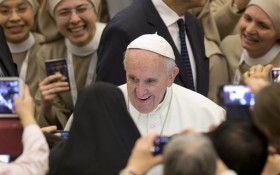 A woman who champions the rights of Islamic State rape victims, Pope Francis and the Afghan women’s cycling team are among the known candidates for the 2016 Nobel Peace Prize as the nomination window was set to close Monday.

The five-member Norwegian Nobel Committee typically receives more than 200 nominations for the prestigious prize, and keeps candidates secret for 50 years. Panel members can make their own nominations during their first judging meeting on Feb. 29.

Norwegian lawmaker Audun Lysbakken nominated Nadia Murad, a Yazidi who escaped from Islamic State sexual slavery to become a spokeswoman for those abused by IS militants.

“We want a peace prize that can awaken the world to the fight against sexual violence as a weapon of war,” Lysbakken, the leader of Norway’s Socialist Left Party, said in a statement.

He has also nominated the Congolese surgeon Denis Mukwege, who treats victims of sexual violence in that nation’s civil war.

In December, Murad told the U.N. Security Council how she and thousands of other Yazidi women and girls were abducted, held in captivity and repeatedly raped after the Iraqi province of Sinjar fell to Islamic State militants in August 2014. She escaped after three months in captivity.

Nobel Laureate Desmond Tutu has given his backing to Pope Francis, as well as the economist Herman Daly and The Club of Rome think-tank for their “significant contributions to global understanding of sustainable development.”

The Afghani women’s cycling team has been nominated by 118 Italian lawmakers to promote “the most democratic means of transportation for all mankind.”

Olav Njoelstad, the non-voting secretary to the Nobel judging panel, said qualified nominators — including lawmakers of national parliaments and former winners — often submit their candidates at the very last minute, with new names pouring in throughout the deadline day. Any nomination postmarked before February 2 will be considered.