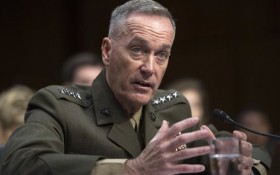 There are rising tensions between the Marines and other military leaders about letting all women into combat roles right away.

The Marines want to slow the movement down, but they could soon be overruled by Pentagon brass.

According to the Associated Press, the Marine Corps is expected to ask that women not be allowed to compete for several front-line combat jobs, creating a showdown between the Corp and Navy Secretary Ray Mabus.

The tentative decision has ignited a debate over whether Mabus can veto any Marine Corps proposal to prohibit women from serving in certain infantry and reconnaissance positions. And it puts Gen. Joseph Dunford, the Marine Corps commandant who takes over soon as chairman of the Joint Chiefs of Staff, at odds with the other three military services, who are expected to comply with political pressure and open all of their combat jobs to women.

No final decisions have been made or forwarded to Pentagon leaders, but officials say Defense Secretary Ash Carter is aware of the dispute and intends to review the Marine plan. The Marine Corps is part of the Navy, so Mabus is secretary of both services.

Mabus on Monday made his position clear.

Mabus’ comments angered Rep. Duncan Hunter, R-Calif., who has asked Carter in a letter to demand Mabus’ resignation because he “openly disrespected the Marine Corps as an institution, and he insulted the competency of Marines by disregarding their professional judgment, their combat experience and their quality of leadership.”

The report acknowledged that “female Marines have performed superbly in the combat environments of Iraq and Afghanistan and are fully part of the fabric of a combat-hardened Marine Corps after the longest period of continuous combat operations in the Corps’ history.”