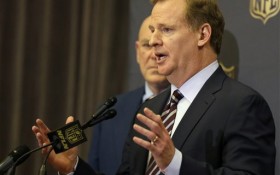 Goodell is in such denial that he claims he is pleased with their ratings and sales.

In an interview with CNBC hosts, Goodell explained that he does not believe that “the best days for NFL ratings” are over–apparently they’re still ahead.

It seems as though he is forgetting the biggest conflict that most Americans are facing with the league, the anthem protests.

It is clear that the controversy has affected NFL ratings and attendance.

But, Goodell sees it differently,”Well, I think, let’s step back and talk about what’s happening to ratings overall: The NFL’s ratings are 25 out of 30 in the top-rated shows in sports in all of entertainment this year,” Goodell explained. “I don’t take your premise at all. I would say that fans are going to different devices to consume media. And you have to be on those devices.”

When asked how he could explain the decline in attendance ratings, Goodell stated that the ratings are only down 1 percent and that is mostly attributed to teams undergoing “major changes.”

It’s a wonder what those major changes could be…

He went on to say,”We’re very pleased where our attendance is,” adding, “We always want to see those numbers go up.”

It is pretty funny how every week there are new photos surfacing on social media of empty football stadiums. Maybe the photos don’t reach Goodell’s Facebook Newsfeed?

When asked about those empty stadium photos, Goodell explained “You always get that late in the season.”

It seems as though last year it was pretty difficult to get tickets to games–let alone get a ticket for $10, $20, or $30.

Even though Goodell does not want to admit why ratings have declined, the proof is in the pudding.

Americans are not happy with players protesting the anthem and if the commissioner does not want to accept the truth, then he will have to accept less money in his pocket.