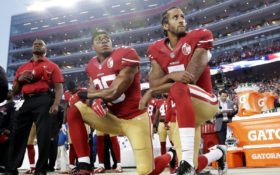 At least 11 people were shot to death and about 70 wounded in a weekend burst of violence in Chicago that instantly became a political issue when President Donald Trump’s lawyer, Rudy Giuliani, blamed the carnage on longtime Democratic rule in the city.

Two outspoken supporters of Trump, African-American political commentators known as Diamond and Silk, also weighed in on the issue. They asked, ‘Where is the outrage from the left after the bloodshed?’

The victims ranged in age from 11 to 63, according to police. All were black Americans. One teenage girl died after being shot in the face. A teenage boy was fatally shot riding a bike Sunday afternoon. Other shootings took place at a block party and a funeral.

So where are the NFL players that last season were demanding justice for the poor? No where to be seen, pointed out Diamond and Silk —

With all of the violence going on in Chicago, where are the NFL players? This would be the perfect time for them to take "A knee" in some of the impoverished neighborhoods in Chicago; protesting against black on black crime and convincing black men to stop killing each other!

Even for Chicagoans all too accustomed to violence in parts of the city, the weekend stood out. By way of comparison, at least seven people were killed and 32 wounded during the long Memorial Day weekend, The Chicago Tribune reported.

Echoing comments that Trump himself has made repeatedly about Chicago, Giuliani blamed Mayor Rahm Emanuel — President Barack Obama’s White House chief of staff — and decades of “one party Democratic rule” in a series of tweets on Sunday and Monday.

The former New York mayor also tweeted his support for Chicago mayoral candidate and former Police Superintendent Garry McCarthy, referring to him as “Jerry” and calling him a “policing genius.”

McCarthy plans to run next February against Emanuel. Giuliani tweeted: “He can do a lot better than Mayor Emmanuel who is fiddling while Chicago burns.”

The mayor had no immediate comment on Giuliani’s attacks.

Most of the shootings happened in poor, predominately African-American neighborhoods on the West and South Sides where gangs are entrenched, said Police Superintendent Eddie Johnson, standing next to the mayor.

Johnson noted that homicides in the city are down by around 20 percent from last year. But he said gang members and others arrested on gun charges aren’t dealt with harshly enough.

“It is the same people who are pulling the triggers,” he said. “This is a small subset of individuals who think they can play by their own rules because they continue to get a slap on the wrist when we arrest them.”

Johnson said at the morning news conference there had been no arrests in any of the weekend shootings.

Days before the attacks, some 200 protesters marched through a well-to-do North Side neighborhood and briefly closed Lake Shore Drive, calling for more resources to stem violence in poor areas.

Tio Hardiman, one of the organizers of last week’s rally, said members of the black community need to take the initiative by mediating truces between gangs.

The violence peaked early Sunday, including one shooting on the South Side that wounded eight people.

Security was increased over the weekend at the outdoor Lollapalooza music festival in downtown Chicago, which drew tens of thousands of young people. But Johnson said the officers were on overtime and weren’t moved from their regular beats in high-crime areas.

Chicago ended 2017 with 650 homicides, after suffering from 771 killings the year before. Though the drop was significant, last year’s total exceeded the combined number of killings in New York and Los Angeles, the two U.S. cities bigger than Chicago.