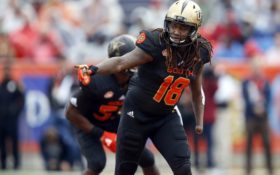 There’s always energy in the bench press room at the NFL scouting combine when players grip the crossbar and begin pumping the 225 pounds of free weights as everybody nearby counts the repetitions.

Even Shaquem Griffin, the one-handed do-it-all defender from Central Florida and a late invitee to the combine, didn’t expect to do what he did Saturday with his prosthetic left hand.

His personal max was 11 reps, but he had a much more modest benchmark in mind here.

“My goal was six,” Griffin acknowledged.

Griffin clipped his prosthetic hand onto the bar, then leaned back.

And the counting began. The crowd was roaring is disbelief.

That’s one more than his twin brother, Shaquille, managed at last year’s combine before the Seattle Seahawks selected the speedy cornerback in the third round of the NFL draft.

“I got chill bumps watching him do 20 reps,” said NFL Network analyst Mike Mayock. “I literally choked up a little bit watching him do that and I can’t wait to watch him tomorrow.”

On Sunday, Griffin will ran the 40-yard dash, did some quickness drills and some on-field testing at Lucas Oil Stadium.

Griffin was 4 years old when doctors amputated his left hand a day after his mother found him in the kitchen attempting to cut off his jelly-like fingers, which were in scorching pain whenever he touched anything, the result of amniotic band syndrome, a congenital birth defect.

Despite having just one hand, he kept up with his twin brother on and off the field.

As dozens of reporters and photographers gathered around him Saturday, Griffin said, “I thought I was going to walk over here and it was going to be like three people.”

Not after becoming the best feel-good story of the combine so far — and by far.

“It was amazing, hearing the crowd and having the juices flowing, I mean I felt it,” Griffin said. “I didn’t know I had it in me.”

Griffin said he’s mind-set is he always has to do more than those around him to impress coaches.

As a freshman, he couldn’t even lift the 45-pound bar, but then he was fitted with the prosthethic and his mom cried when he did his first pull-up.

“It’s amazing to see how far I’ve come from not being able to bench the bar to throwing up 20 reps of 225 and being able to compete with the best here,” said Griffin, the 2017 American Athletic Conference defensive player of the year.

Griffin, who played D-line, linebacker and safety at the Senior Bowl, said he’s going to try to join the defensive back drills Sunday after doing his work with the linebackers.

“I feel like I could just start curling 225 right now and I’m pretty sure come tomorrow, it’s going to be adrenalin just going crazy. I’m excited about tomorrow. If I feel this good doing the bench press, I can’t wait to see how I am tomorrow.”

Griffin said he hopes he’s an inspiration to kids everywhere.

As evidenced by the way they were cheering him on in the bench press, he’s inspiring his fellow draft prospects at the combine.

“That’s kind of cool when you have guys at that top level, the best of the best, and they come and talk to you about you motivating them and inspiring them,” Griffin said. “I feel really good hearing that from them. It motivates me to do more and keep pushing when you’ve got guys all over the place, the top in the country, and they’re proud of me.

“That was an amazing feeling, and it makes you enjoy it that much more.”