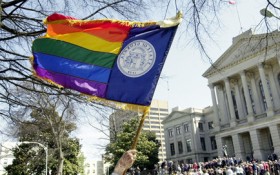 What should have been an uncontroversial bill recognizing pastors’ religious liberty has plunged the state of Georgia into a David and Goliath battle against some of the most powerful forces in the entertainment, banking, and business world.

The NFL is threatening to pull the Super Bowl out of the state. Major Hollywood studies say they’ll stop all filming in Georgia. And a coalition of more than 400 businesses are making veiled threats that if Gov. Nathan Deal does not veto one bill, they may flee the Peach State for good.

So, what would this abominable bill do to cause such outrage?

It allows pastors the ability to decline performing a gay marriage if it is against their religious beliefs.

On March 16, state lawmakers passed the “Free Exercise Protection Act” (H.B. 757). The bill would guarantee that clergy cannot be forced to perform gay marriages if doing so would violate their faith. Churches and religious organizations cannot be required to rent out their space for weddings or receptions and they do not have to hire someone, if doing so goes against the teachings of their religion.

It also bars the government from compelling businesses to stay open on Sunday (or Saturday) if doing so would force them to miss religious services.

But as mundane as that is, it seems to be enough to manufacture extreme outrage from the left.

It’s worth noting — nothing in the bill allows any business or individual the right to refuse services to homosexuals at will. But that fact hasn’t stopped Hollywood and corporate titans from branding it an “anti-gay” bill that gives businesses a “license to discriminate.”

It’s become a scene as familiar as a recurring sitcom plot. Before the Supreme Court legalized gay marriage, homosexual activists insisted no one would ever be coerced into performing a gay marriage.

But when states acted to clarify that Christians still retain their First Amendment rights, Big Business and limousine liberals began threatening the state with economic blackmail. It worked when similar bills were considered in Indiana, Arizona and Arkansas.

Chad Griffin, the president of a liberal activist group called the Human Rights Campaign, told wealthy contributors at a fundraiser in Hollywood last weekend, “You have the influence and the opportunity to not only defeat this bill, but to send a message that there are consequences to passing dangerous and hateful laws like this.”

And it has lawmakers taking notice. The state has a thriving film industry that employs thousands. Some 248 TV shows and film projects are shot in the Peach State – including “The Walking Dead,” “Ant-Man,” and the forthcoming “Guardians of the Galaxy 2.”

Marvel Studios has said it will walk away if the bill is signed into law.

According to Georgia’s Dept. of Economic Development, the film industry generated $1.7 billion in fiscal year 2015 – more than a 1,000 percent increase in eight years.

Gov. Deal has until May 3 to decide whether to sign or veto the act.