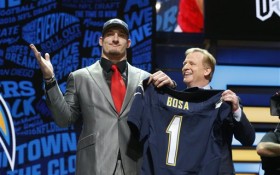 It was all about the quarterbacks before Laremy Tunsil’s bizarre tumble down the board at the NFL draft.

Goff went No. 1 overall to the Rams on Thursday for their first pick since they moved to Los Angeles in the offseason. Wentz was the No. 2 selection by the Eagles after a successful career at North Dakota State in the second tier of college football.

“I’m taking it as an honor and something I’m going to have to prove them right, that they made the right decision,” Goff said.

After the top quarterbacks were off the board, the focus quickly turned to the slide by Mississippi offensive tackle Tunsil, once thought to be a potential first overall selection. He fell all the way to Miami at 13 after a pair of damaging posts to his social media accounts.

A video shared on Tunsil’s Twitter account Thursday night showed him smoking marijuana out of a bong-gas mask contraption. His Instagram account reportedly showed a text-message exchange indicating he took money from coaches at Ole Miss, something he acknowledged during his news conference after he was selected by the Dolphins.

Miami was happy to have him.

“He’s a smart kid,” general manager Chris Grier said. “He’s very football intelligent. This guy is one of those grinders. There’s no doubt this guy loves football, and football is very important to him.”

There was little doubt about the position of the top picks after Los Angeles and Philadelphia each made a big trade to get into the draft’s top two slots. It’s the second straight year two QBs were the first names off the board and the seventh time in the modern era of the draft since 1967.

A third quarterback went in the first round when Denver moved up to No. 26 to take Paxton Lynch of Memphis, making him a possible successor for Peyton Manning with the Super Bowl champion Broncos.

After Goff and Wentz got their hats and exchanged pleasantries with Commissioner Roger Goodell, it was an Ohio State parade to the podium. San Diego grabbed defensive end Joey Bosa at No. 3 with the first real wild card of the night, and Dallas selected running back Ezekiel Elliott with the fourth pick.

Cornerback Eli Apple went to the New York Giants at No. 10, putting three Buckeyes in the top 10 for the first time in school history. Offensive tackle Taylor Decker to Detroit and speedy linebacker Darron Lee to the Jets ran the Ohio State total to five of the top 20.

“That’s why we came to Ohio State — to play at the next level,” Bosa said.

Elliott, who rushed for 1,878 yards last season, made quite a fashion statement when he showed off his midsection while walking the red carpet before the draft. But his dress shirt under his blue suit was in place by the time he was drafted by the Cowboys.

“I wanted to be a little different than everyone else,” said Elliott, who played with a bare midriff during his time with the Buckeyes. “I had to go out on the red carpet with the crop top.”

The Browns, who traded the No. 2 pick to the Eagles last week, moved down again in the first major deal of the night and grabbed Baylor wide receiver Corey Coleman with the 15th pick. They also have the first pick in the second round Friday and could field more trade offers with UCLA linebacker Myles Jack and Alabama’s Derrick Henry and Reggie Ragland still available.

Jack was expected to go in the first half of the opening round at one point, but there is concern within the league about the health of his right knee.

The 6-foot-4 Goff started every game during his three seasons at California and set school records with 977 completions, 12,220 yards passing and 96 touchdown passes. The Rams traded with Tennessee to get the pick.

Tupac’s “California Love” took over the speakers at the downtown Chicago theater when Goff went No. 1.

“It’s a good spot for me and for my family to come watch games,” Goff said. “Very excited to get down there and get to work.”

The Titans then returned to the top 10 through a trade with the Browns and selected Michigan State offensive tackle Jack Conklin at No. 8. Conklin began his career with the Spartans as a walk-on.

Wentz led the Bison to their fifth consecutive FCS championship in January. He passed for 1,651 yards and 17 touchdowns during his senior year that was shortened by a broken right wrist.

It’s the first opening-round quarterback for the Eagles since they grabbed Donovan McNabb with the No. 2 pick in the 1999 draft.

“It’s exciting a team believes in me that much to go up and get me,” Wentz said.