Newsom 'seething' over split with Kamala Harris - The Horn News 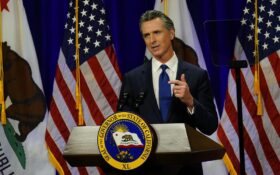 Newsom has been hinting at his intent to veto a new bill on his desk… but the Biden-Harris administration released a statement “strongly” endorsing the bill.

Politico reported on Wednesday, “The governor is privately seething over the Biden endorsement, said five people with knowledge of the governor’s thinking who spoke on condition of anonymity to disclose internal discussions.”

The bill, called AB 2183, would amend the 1975 Agricultural Labor Relations Act to let farmworkers vote by mail in some union elections. The bill intends to provide “an alternative procedure to the polling place election process,” according to the legislative text available online.

AB 2183 would also require employers to either (1) allow mail-in voting for union elections after pledging not to interfere or (2) allow each employee to sign a card indicating his or her intent to join the union.

Currently, the state’s farmworkers vote by secret ballot at a polling site, sometimes at their own workplaces.

Supporters of the new bill say that it would prevent voter intimidation. They also say that the bill lowers the illegal farmworkers’ risk of deportation.

Opponents have argued that the bill amounts to a bald-faced attempt to increase union membership by removing barriers for illegal immigrants.

Newsom finds himself in the middle of a raging debate about this bill. “He’s getting squeezed from all sides,” Steve Maviglio, a Democrat strategist, told Politico.

Some of the state’s big-name Democrats — like House Speaker Nancy Pelosi and Vice President Kamala Harris — have voiced support for the bill.

Pelosi tweeted last month, “I urge the governor to sign #AB2183 for the farmworkers and For The Children.”

Kamala Harris tweeted earlier this month, “It’s long past due that we create an easier path for these workers to organize a union.

Even President Joe Biden released a statement “strongly” in support of the bill earlier this month.

The governor remains similarly skeptical of this new bill, his office said in a statement to The Fresno Bee last month.

“Gov. Newsom is eager to sign legislation that expands opportunity for agricultural workers to come together and be represented, and he supports changes to state law to make it easier for these workers to organize,” Erin Mellon, the governor’s communications director, told the paper via email.

“However, we cannot support an untested mail-in election process that lacks critical provisions to protect the integrity of the election and is predicated on an assumption that government cannot effectively enforce laws,” she said.

After backlash, Newsom’s office issued some clarifications to the paper. Newsom would veto the bill in its current form, but he remains open to negotiating a different version of the bill.

Newsom has sparred with the state legislature before. Last month, he vetoed the legislature’s bill to allow state injection sites. However, he has previously served as a staunch ally of the Biden administration, even appearing with the president during a campaign last year.

The blue-state governor will likely cruise to reelection this November, regardless of his decision on the bill.

Still, by vetoing the bill, Newsom could find himself on the bad side of national figures like Kamala Harris… and he may hinder any plans for a Newsom presidency.

California farm workers have gone above and beyond to provide food for people across our nation. It's long past due that we create an easier path for these workers to organize a union.https://t.co/xWBQ95w3c6