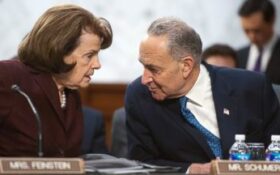 Sen. Dianne Feinstein, D-Calif., has given rise to worrying reports about her short-term memory, and turned 89 this year, with two years still left in her term.

But on Monday, Feinstein committed to finishing the rest of her term, precluding Newsom from appointing U.S. Rep. Adam Schiff as her successor.

Schiff has emerged as a possible contender for Feinstein’s seat in 2024. He’s told Feinstein about his plan to run for her seat, insiders told Politico.

Plus, Schiff openly told NBC Los Angeles, “I did consider a role in leadership in the House, but I was persuaded by many of my colleagues to consider running for the Senate if Senator Feinstein decides not to run for reelection in two years, so I am exploring it.”

As chair of the oversight committee, “Shifty” Schiff received fawning coverage for his investigations into former President Donald Trump.

However, Schiff will not be in House Democrat leadership during the next Congress, and so he may see his star dim before the 2024 election.

He can thank Feinstein for that.

The senator made the remarks during a bombshell interview with the Los Angeles Times.

“Yes. Absolutely,” Feinstein said, when discussing whether she would finish her term and whether she was looking forward to it. “There’s still two years, you know. A lot can happen in two years.”

A spokesman said shortly afterward, “The senator has no plans to step down and will announce her plans for 2024 at the appropriate time.”

Schiff isn’t the only one though. As potential candidates for Senate, Politico also mentioned California Reps. Ro Khanna, Katie Porter and Barbara Lee.

Feinstein has yet to comment on whether to run for re-election. She expects to make a decision “probably by spring.”

However, she declined to serve as Senate president pro tempore. Instead, she passed the role to Sen. Patty Murray, D-Wash.