See this prince get baptized (pics) - The Horn News

The sixth in line to the Swedish throne, the newborn son of Princess Madeleine and New York banker Christopher O’Neill, was baptized Sunday near Stockholm.

Prince Nicolas Paul Gustaf, also to be known as the Duke of Angermanland after a province in northern Sweden, is the first grandson of King Carl XVI Gustaf, who has two granddaughters. He was born on June 15 in Stockholm.

Some 150 guests — mostly family, friends and some political leaders — attended the ceremony on a sunny autumn day in the chapel of Drottingholm Palace just outside Stockholm.

Nicolas, nearly 4 months old, howled as Archbishop Antje Jackelen baptized him, though he stopped crying as she raised him in her arms in front of the congregation. It was the first royal baptism for Jackelen, the Scandinavian country’s first female archbishop.

Nicolas is sixth in line to the throne after his sister, Princess Leonore. Their mother, Madeleine, is fourth in line to the Swedish throne, which Carl XVI Gustaf inherited 41 years ago. She is the youngest of the king’s and Queen Silvia’s three children.

Sweden is a constitutional monarchy in which the royals primarily serve as figureheads. The current dynasty was founded in 1810 when French marshal Jean Baptiste Bernadotte was elected as successor to the throne.

The royal family has only ceremonial duties, such as attending award ceremonies, promoting Swedish businesses abroad and supporting charities. As head of state, the king also receives foreign dignitaries on formal visits to the Scandinavian country. 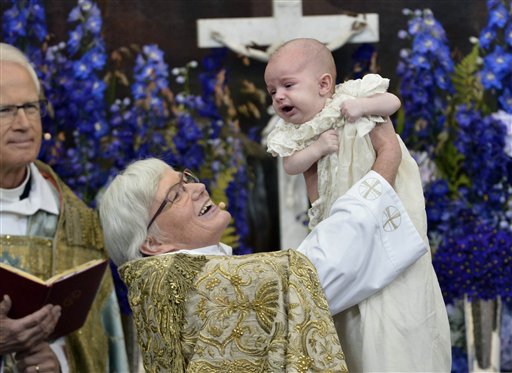