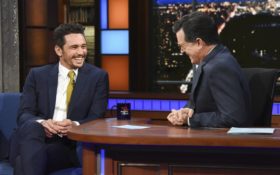 After allegations of sexual misconduct circulated on social media about James Franco, the actor told late-night host Stephen Colbert that the “the things I heard on Twitter are not accurate.”

The allegations against Franco were prompted in part by Franco’s best actor in a comedy or musical win Sunday at the Golden Globes for his film “The Disaster Artist.” At the ceremony, Franco wore a pin supporting the “Time’s Up” initiative for gender equality in Hollywood.

Actress Violet Paley said on Twitter that Franco pushed her head toward his groin in a car, and filmmaker Sarah Tither-Kaplan claimed a $100-a-day contract she signed to perform nudity in a film of Franco’s was exploitive. Actress Ally Sheedy also said in a since-deleted tweet that Franco was an example of why she left the movie business.

“I pride myself on taking responsibility for things that I have done,” Franco told Colbert. “The things that I heard that were on Twitter are not accurate, but I completely support people coming out and being able to have a voice because they didn’t have a voice for so long, so I don’t want to shut them down in any way. I think that it’s a good thing and I support it.”

Franco’s appearance Tuesday on CBS’ “The Late Show With Stephen Colbert” came hours after The New York Times canceled a public event scheduled Wednesday that was intended to feature “The Disaster Artist” director and star and his brother and co-star, Dave Franco, discussing the movie with a Times reporter.

The Times said in a statement that it had canceled the event “given the controversy surrounding recent allegations.”

The scrutiny comes at a delicate moment for Franco, a contender for a best-actor Academy Awards nomination. Voting for the Oscar nominations ends Friday.

Franco said he had “no idea” why Sheedy, whom he directed in a 2014 off-Broadway play, was upset. “I had nothing but a great time with her,” he said. But in reference to other behavior, he said, “If there’s restitution to be made, I will make it.”

“I’m here to listen and learn and change my perspective where it’s off, and I’m completely willing and want to,” he said.

In 2014, Instagram messages showed Franco apparently trying to hit on a 17-year-old Scottish fan. Afterward Franco said he was “embarrassed” and said social media is “tricky.” ″I used bad judgment and I learned my lesson,” the actor said then.

Franco also attended the National Board of Review Awards gala in New York City on Tuesday to present his film’s adapted screenplay award. He didn’t comment on the allegations at the ceremony. An email seeking comment from his publicist wasn’t immediately returned.

Franco is scheduled to appear on NBC’s “Late Night With Seth Meyers” on Wednesday.