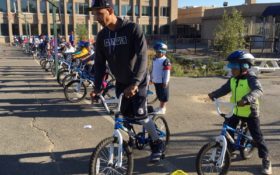 What you will see: kayaking, rock climbing, mountain biking, dance, self-defense, archery and in-line skating — all under the heading of physical education. The teachers say it’s a more fitting description of lessons meant to last well beyond the class bell.

“We want our kids as they walk out of these halls in grade 12 to be active for life,” said Ron Whitcomb, the district’s director of health, physical education and athletics.

With the childhood obesity rate at about 17 percent, the federal education law passed in December 2015 to replace No Child Left Behind elevates health and fitness to rank among things like art, music, civics and science as elements of a well-rounded education and makes additional funding available.

At a time when schools are all about getting students ready for college or jobs, experts say it’s a chance for more physical education teachers to look beyond graduation, too, and leave even the least competitive students with the will and skills to keep moving. In many places, that has meant more bike-riding, outdoor hikes and yoga, and less dodgeball and shimmying up a rope — more choice about which activity to pursue, and less emphasis on who’s the best at it.

“The most important job of a great physical education teacher is to appreciate every student in that class, not just the highly skilled,” said Whitcomb, whose program pre-dates the new law and is among those considered models for the more modern approach.

Connecticut, Vermont and Michigan are among states that include physical education or fitness in their accountability plans for the U.S. Education Department under the new law. The more holistic view of school quality is a departure from the old law’s heavy reliance on test scores.

In the shadow of Washington state’s Mount Rainier, physical education teacher Tracy Krause’s students have for several years been fly-fishing and rock climbing as part of an “Outdoor Academy” program that also incorporates English Language Arts and environmental science. All freshmen at Krause’s Tahoma High School take a foundations class that lets them explore things like dance, yoga, strength and conditioning.

“Our (school) motto is ‘future ready.’ We want kids to leave with a plan for the future, whether it’s college or the military or going straight to the workforce, and I think the same needs to be true about their health,” Krause said.

Washington, D.C., teachers put all of the district’s second-graders on bicycles to gain a lifelong skill. Fourth- and seventh-graders do parkour, in which students leap and vault over obstacles in a way that’s more freewheeling than skill-specific gymnastics. D.C. sixth-graders learn orienteering, including how to read a compass and geocache. High schoolers swim.

“We want to teach a variety of these foundational movement skills with cycling, swimming, parkour. So that they’re very individualized,” said Miriam Kenyon, the district’s director of health and physical education, “and when you have that, you can’t take it away.”

Lily Morgulis, 7, envisions riding bikes with her parents on weekends after mastering the two-wheeler with her classmates at Seaton Elementary School.

“It’s a good exercise. It gives you an opportunity to ride bikes once in a while,” Lily said on a recent morning, after putting on a shiny blue helmet and making several smooth circles. “I feel like it’s really fun. It feels happy.”

On the flip side, schools, including in New Hampshire, Virginia and Maine, are increasingly doing away with “human target” games like dodgeball in gym class, as well as team sports that may pit accomplished competitive athletes against classmates who would rather sit on the sidelines.

The goal should be to meet all students where they are and move forward, said Cheryl Richardson, senior director of programs at SHAPE America, the Society of Health and Physical Educators, not “where P.E. is so hard that they learn to hate it or associate it with some sort of torture.”

Gym class was so defeating for Christa Crawford Valency that she transferred out of her private Los Angeles high school.

“The P.E. teacher was a former professional football player. He was … ‘We’re going to run stairs,’ and I was just, like, throwing up. I could not keep up,” Crawford Valency, 31, said. Though she surfed and did martial arts, the “suicide runs” and competitive volleyball games required skills she hadn’t acquired.

“I was having panic attacks,” she said.

Now a teacher herself in Chula Vista, California, Crawford Valency makes sure her fifth- and sixth-grade students acquire fundamental skills like visual and spatial awareness that will help prepare them for whatever sport or dance they may pursue later.

WARNING: Do NOT wash your hair until you read this [Sponsored]