New York "rape gang" may get off easy - The Horn News 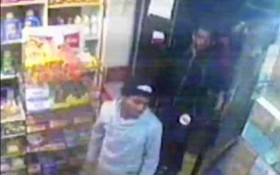 They’re alleged to have brutally attacked and raped a young woman at a Brooklyn playground, then celebrated their dark deed while shopping at a local convenience store.

Now, four teenagers have been taken into police custody in connection with what the New York City mayor called a “horrific attack.”

Police said Sunday two teenagers surrendered and two were apprehended after the attack last week, which gained national headlines. Charges were pending against a 14-year-old, 17-year-old and two 15-year-olds. A fifth suspect is still being sought.

Authorities said the 18-year-old woman was accosted just after 9 p.m. Thursday as she and her father walked inside Osborn Playground in the Brownsville section of Brooklyn.

Police said there were five suspects, and one pointed a gun at the father and told him to leave. Each man raped the woman, police said. The father returned with two police officers, but the attackers fled.

Images of the alleged attackers, smiling and joking, were later captured on a convenience store security camera.

The woman was treated at Kings County Hospital and released.

Some legal experts warn that sentencing juveniles to serious jail time is not exactly easy in New York. Considering the juvenile status of three of the accused criminals, getting them tried as adults would require the prosecution to have a strong case against each teen.

Given the nature of the horrific crime the five are accused of, the state is likely to attempt to try them as adults and seek maximum punishment. But, as the investigation continues, the possibility still exists that at least one of the alleged attackers could be tried as a juvenile.

“I am disgusted and deeply saddened by the horrific attack,” New York City Mayor Bill de Blasio said in a statement released Sunday.

He added, “Every New Yorker in every neighborhood deserves to feel safe and protected, and we will not stop until the perpetrators of this disturbing attack are held accountable for their actions.”

Elected officials, residents and activists spoke out against the alleged assault on Sunday, offering a reward for information leading to an arrest.

Brooklyn Borough President Eric Adams released a statement saying he was “sickened” by reports of the attack and called on the New York Police Department to conduct a full investigation “not only to identify all those responsible for this horrific attack, but also to determine if everything possible was done to protect the victim and the public.”

An NYPD police spokesman said there was no delay in the police response.

“A patrol car from the 73rd Precinct was approached on the street and told about the attack by the victim’s father, who directed the officers to the scene,” police spokesman Stephen Davis said.

“The police officers immediately responded and located the victim,” Davis said. “The suspects had already fled.”

Adams on Sunday also questioned why the police waited until Saturday night, 48 hours later, to alert the public of the crime when it released surveillance video they said showed the men in a convenience store around the time of the alleged incident.

Davis said the commanding officer of the precinct began contacting local community leaders about the alleged rape on Friday.