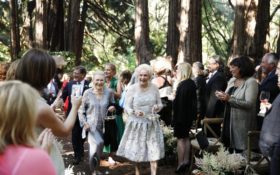 Not only did the outgoing and energetic 80-somethings draw cheers as the surprise flower girls at their granddaughter Lucy Schanzer’s wedding, but they reprised the role to further acclaim at the wedding of Schanzer’s younger sister the following year.

Being close with her grandmothers, Schanzer, 31, wanted to involve them in her wedding ceremony in a way that was prominent and unique. “Grongong” Nancy and Grammy Flossie embraced their chance to be flower girls, which was kept secret until the two, wearing pearls and big smiles, began scattering petals from antique silver baskets to the “I Love Lucy” theme song. They walked down the aisle before an adoring crowd just before Schanzer married Kyle Schanzer on May 30, 2015, in a redwood forest in Carmel, California.

“When they saw us, they started laughing,” said Rutchik, 87, of Dallas. “Then they had whistle calls and they called our names and ‘Go girl!’ We broke up the wedding. It was really a fun thing.”

Many modern couples are tinkering with tradition as they personalize their weddings, and that includes placing grandparents in more visible positions like flower girl or ring bearer, best man or bridesmaid. It’s a loving way to celebrate grandparents who were involved and influential in their upbringing.

“It honors the legacy of a family and the extension of a family and how the family is growing, because that’s fundamentally what marriage is about,” said San Francisco wedding and event planner Alicia Falango, who estimates that about 30 percent of her couples include grandparents in a unique way. “It’s not the norm per se, but it’s gaining popularity,” she added.

These unexpected, high-profile roles are a departure from what many brides and grooms have done for years: quietly recognizing grandparents with a corsage or boutonniere, and having them walk down the aisle ahead of the bridal party to take front-row seats.

Recent wedding seasons have seen an Indiana groom who tapped his 90-year-old grandfather as best man, a Minnesota bride who chose her 92-year-old grandmother as her flower girl, and a Pennsylvania wedding featuring two grandmothers in matching gowns as flower girls.

“It resonates with a lot of people,” Falango said. “When you are an adult, it’s a blessing to have a living grandparent. It’s so emotional for people. They go inward and say, ‘Wow, I wish my grandma or grandpa were still here.’”

Beyond including a grandparent in the bridal party, couples can ask one to officiate, like Nadine Gorand did with her grandfather Raymond Oddi. Gorand and her fiance, Pat, wanted an officiant they loved and respected for their Sept. 16 wedding at the Art Institute of Chicago. They immediately thought of Oddi, then 89.

“His work ethic and his family values are definitely things we both look up to and admire,” said Gorand, 28. She added that her Gramps made the ceremony feel “really intimate and personal and just very loving and genuine.”

At the reception, couples can also mention their parents’ parents in speeches, display their old wedding photos or honor them on the dance floor.

At the Oct. 14 wedding of Ashley and Matthew Beine in West Bend, Wisconsin, the couple’s seven grandparents proudly walked down the aisle before the wedding party, and later, the DJ played a snippet of a slow song from decades ago to honor their weddings.

“We know how rare it is to have that many grandparents alive for a big life event like this,” said the bride, 23. “They have set a really great example for my husband and me on life after 40 years of marriage. They’re all very honest about the fact that there are some days you want to kill each other and other days you love each other and it’s just worth it.”

Schanzer’s grandmother Grongong Rutchik allows that grandparents are sometimes overlooked at weddings, and having such a special place in her granddaughters’ celebrations made her feel loved.

“It made me feel awful special, and I loved being part of such a happy occasion,” she said.

Schanzer loved it too.

“I feel like it made the ceremony,” she said. “Even though I didn’t see it, I feel like that’s the wedding detail that I remember the most.”