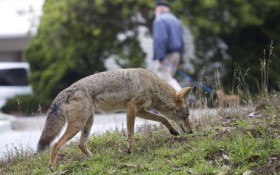 They’re called Coydogs, they’re ferocious enough to take down a moose… and they’re becoming a big problem for suburban residents on the East Coast of the United States.

Coydogs are a new species, representing a dangerous mix of three breeds – Grey wolves, coyotes, and domestic dogs. The three dominate canine breeds have been hybridizing into a new species for the better part of two centuries, since settlers first came to the East of the United States and brought domesticated dogs with them.

These Coydog were found to be approximately 82 percent coyote, 9 percent dog and 9 percent wolf, according to a study co-authored by Roland Kays, curator of mammals at the New York State Museum.

The study, from the journal Biology Letters in 2010, used museum specimens and genetic samples to show that coyotes migrating eastward bred with wolves to evolve into a larger form that has become the top predator in the Northeast, filling a niche left when native eastern wolves were hunted out of existence. The hybridization allowed coyotes to evolve from the scrawny mouse-eaters of western grasslands to robust deer-hunters in eastern forests over hundreds of years.

The genetic techniques used in the recent study allowed researchers to estimate that hybridization, in most cases, happened when humans were hunting eastern wolves to extinction, Kays said.

“The few remaining animals could find no proper mates so took the best option they could get,” Kays said.

Two hundred years later, you have what is called a Coydog. The species retains much of the size of a wolf, and the tenacity of a coyote.

What makes especially dangerous to humans is that they’ve lost much of their natural fear of humans, due to the mix of domestic dog genes. They’ve been so successful, they’re beginning to become a regular threat to dog walkers in towns throughout the Northeast.

Their cousins, western coyotes, will go far out of their way to avoid humans. But Coydogs don’t bother. In fact, they’re so used to humans and adapted to suburban life, there’s been reports of Coydogs looking both ways before crossing streets.