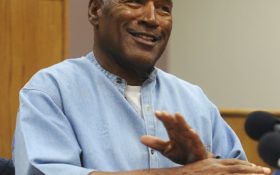 Fox TV is offering viewers a chance to go “inside” O.J. Simpson’s head when it airs a previously unseen 2006 interview in which he theorizes about what happened the night his ex-wife was murdered.

Airing Sunday, “O.J. Simpson: The Lost Confession?” will include the ex-football star’s fictionalized “confession” to the 1994 murder of ex-wife Nicole Brown Simpson and her friend, Ronald Goldman.

“This is him in his own words giving you a window into his psychology,” said Terence Wrong, the special’s executive producer. “He’s actually going to put you inside his head — his very complicated head — at various points.”

At the heart of the two-hour special is an on-camera interview Simpson gave to publisher Judith Regan 12 years ago as part of a promotional push for Simpson’s book “If I Did It.”

The airing of the interview was quickly scrapped after an outcry and the footage languished for years. “This was literally misplaced,” Wrong said on Thursday before screening 45 minutes of the interview for journalists.

Wrong, who previously produced the shows “NY Med” and “Boston Med,” was asked in mid-January to put together the Fox special by Rob Wade, president of alternative entertainment and specials at Fox.

“He said, ‘I’ve got this box of tapes here. It’s incredible. We don’t really know what’s on it. Can you look through it?’” Wrong said. He said he was stunned by the footage but felt that the original questioning of Simpson was too light and decided to balance his account with analysts.

Sponsored: Is this nutrient in your diet?

The special will examine the first time Simpson met Nicole, trace their tempestuous relationship, take viewers into the murders, the white Bronco chase, the trial and verdict and aftermath, plus how he processes his wife’s death and his relationship with his kids.

In the interview with Regan, Simpson talked about how he would have committed the murders “if he were the one responsible.” He describes going to Nicole Brown Simpson’s home with an accomplice, a so-called friend named Charlie, who brought along a knife. Simpson said he had words with Goldman and his ex-wife that escalated. “As things got heated, Nicole fell and hurt herself,” he said on the tape.

In Simpson’s telling, Goldman assumed a martial arts pose and Simpson says he recalls grabbing the knife. “To be honest, after that, I don’t remember except I’m standing there and there’s all kind of stuff around,” he said. Regan asks what he means and Simpson replies: “Blood and stuff around.” He said he and Charlie then fled and tossed bloody clothes.

Simpson was acquitted of criminal charges by jurors in one of the most high profile cases in years but found responsible in a subsequent civil trial.

Wrong said that Darden speculates during the TV special that Charlie is Simpson’s way of creating an alter ego to give himself cover in his mind for the crime.

Regan had originally interviewed Simpson for a book to be published by her HarperCollins imprint, ReganBooks. But “If I Did It” was dropped in response to widespread outrage. She was fired in 2006, about a month after News Corp. canceled the project. She sued and settled for an undisclosed sum.

Fox, which like HarperCollins was owned by News Corp., planned to air a two-part special before the book’s planned 2006 release. But the network reversed course after some Fox affiliates balked.

The ghostwritten, fictionalized account of the murders ultimately was published by another company, and a federal bankruptcy judge later awarded rights to the book to Goldman’s family to help satisfy a $38 million wrongful death judgment against Simpson.

Wrong said that Simpson’s account in the videotaped interview hews largely to the account in the book but there are variations in the telling and includes unfounded claims by Simpson, including that Nicole Brown Simpson was pregnant. Wrong said he did not know whether Simpson was paid at the time for his interview.

The new TV project has the blessing of both families but no connection with Simpson, who was paroled in October after serving time for a robbery conviction.

Interest in Simpson has proved to be enduring. FX’s 10-part miniseries on the trial in 2016 called “American Crime Story: The People vs. O.J. Simpson” racked up multiple Emmy Awards, and Ezra Edelman’s documentary “O.J.: Made in America” won the Academy Award for best documentary.