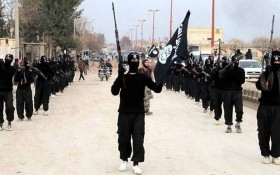 Americans are souring on President Barack Obama’s approach to fighting the Islamic State, according to an Associated Press-GfK poll that also found deep pessimism about U.S. prospects for success in Afghanistan and uncertainty about Obama’s plan to leave thousands of troops there when he leaves office.

More than 6 in 10 now reject Obama’s handling of the threat posed by the Islamic State in Iraq and Syria, where Obama has been escalating the U.S. military’s involvement in a bid to break a vexing stalemate. Support for his approach has followed a downward trajectory since the U.S. formed its coalition to fight the group in late 2014. Last September, Americans were roughly split, yet disapproval has jumped 8 percentage points just since January.

Those concerns mirror broader trepidation about Obama’s management of foreign policy, which garnered approval from just 40 percent of Americans in the AP-GfK poll. They come as Obama struggles to demonstrate progress advancing U.S. interests in the Middle East, where Obama hoped to disentangle the U.S. military after a decade-plus of war but will likely leave three military conflicts ongoing when his presidency ends in 2017.

Complicating Obama’s efforts to strike the right balance, his critics include both those who feel he’s betrayed his pledge to keep U.S. troops out of combat in Iraq and Syria and those who argue exactly the opposite: that Obama is pursuing half-measures that put U.S. troops at risk but are too paltry to make a decisive difference.

“ISIS is literally laughing at our president,” said Donald Hammond, a retired police officer and Republican from Brooklyn, Ohio. He accused Obama of tying the military’s hands out of concern about potential U.S. casualties. “If we’re going to be committed to the fight, he needs to commit seriously and stop playing patty-cake.”

The AP-GfK poll was conducted before Obama’s announcement last week that up to 50 U.S. special operations troops will head to northern Syria, the first time the U.S. has openly sent forces into that civil war-wracked country. But it reflected apprehension that has grown measurably over the course of 2015, during which Obama increased the number of troops in Iraq and revamped his approach against IS, including dropping a campaign to train Syrian rebels that had failed miserably.

The Islamic State threat and the proper U.S. response promise to play a major role in the 2016 presidential campaign, in which many of the Republican candidates have called for sending ground troops into Iraq and Syria, and even Democratic front-runner Hillary Rodham Clinton has called for a U.S.-imposed no-fly zone in Syria. Two-thirds of Americans say the Islamic State threat is a very or extremely important issue, the AP-GfK poll found.

Obama’s approach has drawn flak from both parties in Congress, where lawmakers have argued current U.S. policy in Syria is too limited.

Concerns about Obama’s strategy overseas resonate deeply when it comes to Afghanistan, where Obama abruptly dropped his plans last month to pull nearly all U.S. forces by end of 2016. Instead, Obama will keep at least 5,500 troops there when he leaves office, hoping to protect fragile gains made over the last 14 years and shore up the fledgling Afghan security forces.

Roughly a third of Americans said they approve of that revamped plan, with one-third opposed and another third neither in favor nor against. Just 1 in 5 say it’s likely or very likely that Afghanistan can maintain a stable, democratic government once the U.S. leaves, and 71 percent predicted history will judge the Afghanistan war as more of a failure than a success.

Jamie Atkins, a 40-year-old Democrat from Easley, South Carolina, said he has mixed feelings about Obama’s overall approach to foreign affairs. But on Afghanistan, his misgivings were clear.

“I disapprove with him sending the troops to Afghanistan,” said Atkins, a disabled former construction worker. “They put their lives in danger, and some are killed in the line of duty.”

The AP-GfK Poll of 1,027 adults was conducted online Oct. 15-19, using a sample drawn from GfK’s probability-based KnowledgePanel, designed to represent the U.S. population. The margin of sampling error for all respondents was plus or minus 3.3 percentage points.