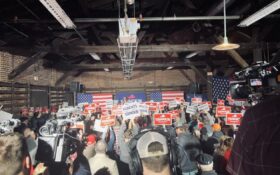 Virginia will elect a new governor next week — and it looks like next week will be very rough for Democrats.

Democrat candidate Terry McAuliffe is a former governor who remains popular, and no Republican has won a statewide race in Virginia since 2009.

But Republican candidate Glenn Youngkin has burst ahead in a recent poll. Way ahead.

Fox News released a shocking poll on Thursday, five days before the election.

Youngkin is polling at 53 percent among likely voters, to McAuliffe’s measly 45 percent.

Fox took the same poll two weeks ago. Since then, likely voters have swung against McAuliffe by 13 points.

For the purposes of this poll, “likely voters” are defined as registered voters who report an intention to vote or an interest in the race.

The race seems closer among registered voters, although they’ve also soured on McAuliffe.

Two weeks ago, McAuliffe was polling at 52 percent among registered voters. Now he’s polling at 47 percent, to Youngkin’s 48.

Fox says attributed Youngkin’s rise to new enthusiasm among Republicans, especially those with children. Indeed, parents have swung toward Youngkin by 13 points in the last two weeks, the polling shows. In the poll, a 12-point majority of parents prefers Youngkin to handle education policy.

Sure enough, Parents have been flocked toward Youngkin amid national attention on Loudon County schools. The county has endured violence at school board meetings and an alleged string of sexual assaults at public schools.

The superintendent, Scott Ziegler, released a statement this month, and he called on school administrators to “separate alleged offenders from the general student body.” However, the school district simply transferred an alleged sexual offender from one school to another, where he struck again, according to a report by The Daily Wire.

Among likely voters, Youngkin is polling so far ahead as to be outside the margin of error.

However, one pollster, Chris Anderson, spoke about the possibility of a comeback for McAuliffe.

“With the race essentially tied among the full registered voter universe, McAuliffe could still pull this off,” Anderson told Fox. Anderson, a Democrat, conducted the poll together with Daron Shaw, a Republican. “But it would take something big to ignite enthusiasm for McAuliffe’s candidacy and a massively effective get out the vote effort.”

McAuliffe boasts more cash on hand than Youngkin, according to a September report by OpenSecrets. With that money, McAuliffe can ramp up the frequency of his television ads during the last days before the election.

The election will be held on Tuesday, Nov. 2.