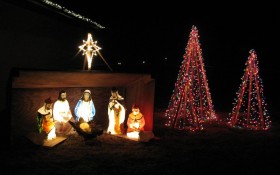 Americans have split down party lines on any number of issues, but the nation can still agree on one thing.

Namely, conservatives and liberals listen to the same Christmas music.

They only disagree about inflation’s effect on the Christmas experience.

In a new poll by Monmouth University, Republicans named “Silent Night” as their favorite Christmas carol. 15 percent of Republicans chose this carol, with the second-place carol receiving only 4 percent.

Independents broke this trend. Only 8 percent of independents chose “Silent Night,” with a whopping 62 percent declaring no favorite Christmas carol at all.

Meanwhile, 28 percent of Democrats enjoyed Christmas shopping either “not too much” or “not at all.” 29 percent of Republicans agreed, marking another area of bipartisan agreement.

31 percent of Democrats enjoyed the activity either “a great deal” or “a fair amount,” compared to 32 percent of Republicans.

However, 55 percent of Republicans cut back on Christmas spending due to high prices, compared to only 35 percent of Democrats.

They don’t agree on everything!

The pollsters asked the respondents to self-report their party affiliations. They interviewed 805 respondents between Dec. 8 and Dec. 12. They used either landline or cell phone.

Pollsters chose phone numbers both by dialing random digits and by “list-based sampling.” They estimated the margin of error at 5 percent.