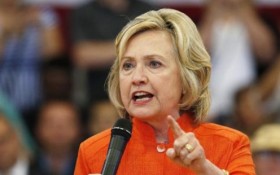 But many political observers believe it was the huge loss to Obama in New Hampshire when the wheels really flew off Clinton’s campaign.

And if a new poll is to be believed, Clinton isn’t just heading for another loss in New Hampshire — she could be facing the worst embarrassment of her political career.

According to a recent CNN/WMUR, Clinton’s campaign is again down big time in the Granite State, this time to Vermont Sen. Bernie Sanders. The poll, released Tuesday, has likely Democratic voters leaning towards Sanders by a huge margin – 60% to 33%, or nearly 2-to-1.

In Iowa, during a four-stop swing through the state, Sanders also predicted a “very close” race with Clinton in the state’s lead-off caucus on Feb. 1, and a Sanders surprise win would be similar to Obama’s narrow victory in the Midwestern state in 2008.

“Today the inevitable candidate doesn’t look quite so inevitable as she did 8 1/2 months ago,” Sanders said during a town hall meeting on a frigid morning in Fort Dodge. He later told reporters that if he were in Clinton’s position, “I would be nervous.”

It was the latest volley in a Democratic race that has become increasingly heated in recent days as Sanders pushes to take over Clinton’s lead in Iowa.

Clinton’s overarching argument against Sanders is that nominating the Vermont senator would put the party at risk of losing to Republicans in November. But the recent poll of New Hampshire residents say that Democrat primary voters trust even the self-declared democratic socialist to handle the economy over Clinton, 57% to 33%.

These same voters also reportedly find Sanders much more trustworthy than Clinton, saying Clinton is clearly the most untrustworthy candidate in the Democratic field.

The CNN/WMUR poll results can be found here.