New England cleans up after massive storm - The Horn News 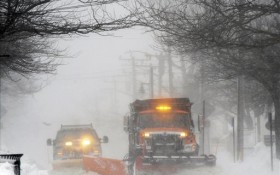 A wind-driven winter storm that brought blizzard conditions to Cape Cod fell short of forecast snowfall totals and spared the Northeast the widespread power outages that had been predicted.

Snowflakes were still flying Tuesday as New England residents continued to mop up from Monday’s storm. And the misery may not be over.

The National Weather Service forecast scattered and localized heavy snow showers in Southern New England on Wednesday that could drop another 4 inches of snow, but are more likely to leave behind an inch or so.

Following predictions of up to 18 inches in some parts of New England, the totals by Tuesday morning among the hardest hit areas were 11 inches in Falmouth, Massachusetts, and 10 inches in nearby Yarmouth. Oak Bluffs on Martha’s Vineyard fell just short of 10 inches. Boston got 6.4 inches.

In Rhode Island, Coventry and Scituate both got 8.5 inches, while Pomfret, Connecticut had 8.2 inches, according to the National Weather Service.

A day after a charter bus crash that injured three dozen during the snowstorm on Interstate 95 in Connecticut, seven people remained in critical condition; a total of 11 are hospitalized.

New York City, New Jersey and Pennsylvania got much less snow than was originally forecast, but some accumulation was predicted as the storm was expected to last into Wednesday. Predicted snowfall totals for southeastern Pennsylvania and parts of New Jersey were downgraded to 1 to 3 inches, although a winter storm warning remained in place for parts of Philadelphia’s western suburbs, where up to 5 inches was possible. Parts of western Pennsylvania and West Virginia could get more than 6 inches of snow.

New York City could get up to 1 to 3 inches of snow, and the weather service issued a coastal flood warning for Long Island’s south shore.

Most New England schools that had closed on Monday reopened Tuesday, although some openings were delayed.

The storm lasted into early Tuesday in New Hampshire, where the first-in-the-nation presidential primary is being held. The weather service said snow will be light and fluffy and accumulation will be modest.

The weather service also confirmed that blizzard conditions were reached in six locations on Cape Cod and the islands.

Blizzard conditions are described as falling snow that reduces visibility below a quarter mile, with winds gusting frequently to 35 mph or more, for three hours.

The mid-Atlantic region awoke Tuesday to a mix of rain and snow. The weather service issued a winter weather advisory in the region and expected the mix to change over to snow and fall occasionally during midday hours, with rain mixing in during the afternoon south of Baltimore. Less than an inch of snowfall was forecast in the Washington area, but 3 to 6 inches in the Baltimore area and northern Maryland.

Cold, windy weather descended on the Carolinas. The weather service forecast freezing temperatures all the way to the South Carolina beaches by Wednesday night. Brisk winds of upward to 30 mph will mean wind chills in the teens and below for most areas by Wednesday night. Up to 6 inches of snow is expected in the North Carolina mountains by late Tuesday.