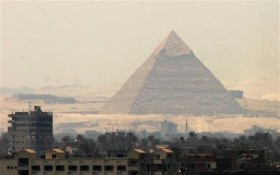 Two weeks of new thermal scanning in Egypt’s Giza pyramids have identified anomalies, including a major one in the largest pyramid, the Antiquities Ministry announced Monday.

Antiquities Minister Mamdouh el-Damaty and technical experts working on the project showed the thermal differences in the pyramid in a live camera presentation to journalists.

The scanning showed “a particularly impressive one (anomaly) located on the Eastern side of the Khufu pyramid at ground level,” the ministry said in a statement. The largest of the three Giza pyramids is known locally as Khufu and internationally as Cheops.

Experts “concluded the existence of several thermal anomalies that were observed on all monuments during the heating-up or the cooling-down phases”.

The thermal scanning was carried out during sunrise, as the sun heats the structures from the outside, and then during sunset as the pyramids are cooling down. The speed of the heating and cooling phases was used to uncover “hypotheses” such as empty areas in the pyramids, internal air currents, or different building materials used.

“To explain such anomalies, a lot of hypotheses and possibilities could be drawn up: presence of voids behind the surface, internal air currents,” the Egyptian Antiquities Ministry said in a statement, but didn’t explain what these possibilities are.

The structures are over 4,500 years old.