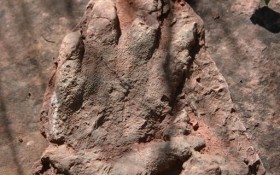 Spain says a footprint of a dinosaur that roamed the area 230 million years ago has been found in northeastern Catalonia, and says it’s the best preserved dinosaur print seen so far in the Iberian Peninsula.

The print of a reptile-like creature called an Isochirotherium — an ancestor of dinosaurs and crocodiles — was discovered in early April by a person out walking in Olesa de Montserrat, 40 kilometers (25 miles) north of Barcelona.

The government said Monday that a plaster cast of the print was made by the town’s council and handed over to the region’s archaeology and paleontology department “so it can be studied and preserved.”

The statement said the “conservation status is exceptional and retains details of claws and skin.”