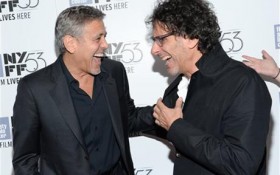 Joel and Ethan Coen’s comedy “Hail, Caesar!” has been chosen to open the 66th Berlin International Film Festival in February.

The film is set in 1950s Hollywood and stars Josh Brolin, George Clooney and Channing Tatum.

Festival Director Dieter Kosslick said in a statement Friday that the film will be a “perfect start” to the festival. The directors’ “True Grit” opened the festival, known locally as the Berlinale, in 2011.

“It’s wonderful that Joel and Ethan Coen are once again opening the Berlinale,” Kosslick said. “Their humor, unique characters and fantastic narrative skill are guaranteed to thrill the audience.”