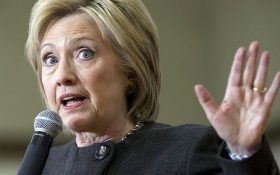 Hillary Clinton’s not off the hook yet!

The FBI may have closed its case on the presumptive Democratic presidential nominee’s email scandal, but there are new troubles surrounding the Clintons.

And this one could blow her email fiasco right out of the water!

FBI agents are reportedly looking into whether or not Clinton gave favorable treatment to those who donated to the Clinton Foundation while she served as secretary of state — a frequent accusation from critics of hers.

Asked about an investigation into the foundation and a possible corruption case during his testimony last week, FBI Director James Comey played coy.

“I’m not going to comment on the existence or nonexistence of any other ongoing investigations,” Comey told the House Oversight Committee.

But multiple reports say the agency has been looking into it – and an intelligence source told Fox News earlier this year that “many previous public corruption cases have been made and successfully prosecuted with much less evidence than what is emerging in this investigation.”

In fact, the source said agents would be “screaming” mad if Clinton isn’t prosecuted this time.

It’s not hard to see why.

Clinton nonprofits have raised $2 BILLION, according to The New York Post, and big chunks of that cash come from foreign governments and business interests — including donations made by shady overseas accounts while Clinton was secretary of state.

And on the surface, it looks like there was more than a little quid pro quo going on.

In a case documented in the book “Clinton Cash” by Breitbart editor Peter Schweizer, the foundation allegedly hid millions of dollars donated by the head of a Russian-owned uranium company.

In what has to be more than a complete coincidence, Clinton’s State Department helped the company snag a deal for U.S. uranium — one that gives Moscow control over nearly 20 percent of the American supply, according to the book.

In another case, Rajiv Fernando was given a seat on the State Department’s highly sensitive International Security Advisory Board at Clinton’s specific urging despite the fact that he didn’t pack anything close to the qualifications of others on the board, according to ABC News.

“We had no idea who he was!” one flabbergasted member told the news network.

Turns out he had something other than qualifications in his corner: Fernando was a big-time Clinton Foundation donor and a high-level contributor to Hillary’s failed 2008 bid for the presidency.

There are also questions over foreign donations the foundation tried to hide — until they were exposed by a Reuters investigation.

In addition, former president Bill Clinton’s speaking fees doubled (and sometimes tripled) after his wife became secretary of state — including fat payday by organizations with potential State Department business, according to The Atlantic.

“Department ethics officials reviewed the speaking engagements, but apparently rarely, if ever, objected,” the website reported.

Big money… no objections… a rubber-stamp “ethics” panel… and pay-for-play access to the highest levels of the United States government.

If these allegations are true, they won’t just doom Clinton’s presidential campaign.

They could finally put her behind bars!