Charitable church tips pizza boy HOW MUCH?! - The Horn News 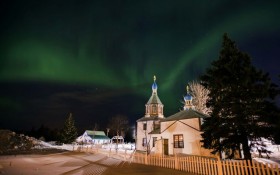 One large cheese pizza, extra blessings. Just two weeks after a church congregation in Ohio tipped a pizza delivery driver $1,000, a church in Anchorage has upped the stakes.

Anchorage television station KTVA reports that Ken Felber has been a pizza delivery driver for 14 years. When he delivered a pizza to Chugach Covenant Church on Sunday, the pastor asked him what was his best-ever tip.

Felber was very mindful of his heavenly surroundings and replied: “Oh, heck no!” He says it’s the coolest thing that’s ever happened to him.

Krause says this was an opportunity to do something small that would really have a big impact on somebody’s life.

Felber has no plans to splurge since he needs new snow tires and has medical expenses. But he does plan to take his wife out for a nice spaghetti dinner.