New CA law results in over 500 deaths - The Horn News 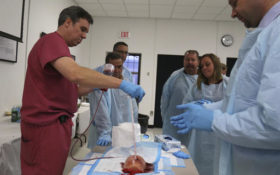 At least 504 terminally ill Californians have requested a prescription for life-ending drugs since a state law allowing physician-assisted suicides went into effect in June 2016, marking the first publicly released data on how the practice is playing out in the nation’s most populous state.

The number represents only those who have contacted Compassion & Choices, an advocacy group that provides information on the process. The organization believes the overall figure to be much higher.

The group released the data Thursday. State officials have not released figures yet.

Oregon was the first state to adopt such a law in 1997. It reported 204 people received such prescriptions in 2016 and of those, 133 people died from ingesting the drugs, including 19 prescription recipients from prior years. Most were older than 65 and had cancer.

Under California’s law, patients must be given six months or less to live, make two verbal requests within 15 days of each other and submit a written request. Still, critics say concerns remain that it will lead to hasty decisions, misdiagnosis, and waning support for palliative care, in which dying people can be sedated to relieve suffering.

According to Compassion & Choices, 498 health care facilities and 104 hospice centers in California have adopted policies to allow for such prescriptions. More than 80 percent of insurance companies in the state also cover the cost of the drugs, according to the group.

Dire Warning For US Inside [sponsored]

The law passed in California after 29-year-old Brittany Maynard, who was dying from brain cancer, had to move to Oregon in 2014 so she could end her life.

The California law is being challenged by the Life Legal Defense Foundation, American Academy of Medical Ethics and several physicians who say determining when someone has six months or less to live is an arbitrary decision that opens the door for abuse. A hearing is scheduled for June 16.