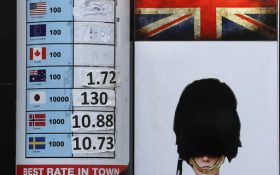 The value of the British pound sterling may have been dropping in recent weeks but imaginative Brits have found a way to put cash to work: It turns out the new plastic five-pound-note can be used as a stylus to play vinyl records.

A number of YouTube videos have been posted in recent days showing the new note “playing” music on a turntable, though it must be said the fidelity does not match sound produced by expensive equipment.

The plastic note is illustrated with images of Queen Elizabeth II and Winston Churchill. It was introduced last month to generally favorable reviews.

The note is worth just over $6 at Wednesday’s rate. The pound has been dropping largely because of concerns about Britain leaving the European Union.