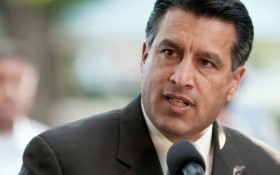 He offered kind words in public to President Barack Obama, but the message behind them was clearly anything but nice.

Sandoval said yesterday he is not interested in being considered for the Supreme Court vacancy, a decision that foils Obama’s plan to breach Senate Republicans’ planned blockade of any election-year confirmation.

Sandoval, a Republican and the state’s first Hispanic governor, issued a statement the day after news broke that the White House was considering him as a potential replacement for the late Justice Antonin Scalia.

“Earlier today, I notified the White House that I do not wish to be considered at this time for possible nomination to the Supreme Court of the United States,” wrote Sandoval, a former federal judge.

He offered no public reason for his decision, but political analysts were quick to weigh in.

I gather Sandoval realized he was was a pawn and wanted no part of it. He wants a judicial or Cabinet post someday. pic.twitter.com/e5ySKReaut

The Senate’s vetting process for any nominee is expected to be viciously political, if hearings take place at all. Regardless of which nominee Obama settles on, “this nomination will be determined by whoever wins the presidency in the fall,” said Senate Majority Leader Mitch McConnell, R-Ky.

Sandoval’s critics at home have more often come from the right than the left. In November 2012, he became the first Republican governor to expand Medicaid as part of Obama’s health care law, drawing criticism from conservative members of his party.

Sandoval has raised taxes and declined to join state Attorney General Adam Laxalt, a Republican, in a federal lawsuit challenging U.S. regulations that protect the sage grouse. He has argued that negotiations with Interior Secretary Sally Jewell and others in the Obama administration offer a better chance of easing land-use restrictions for Nevada ranchers, miners and others than a court battle.

He is limited to two terms as governor and is set to leave office in early 2019. He announced last year that he will not run for Reid’s seat in November. Reid is retiring, and Sandoval would have been a strong favorite.