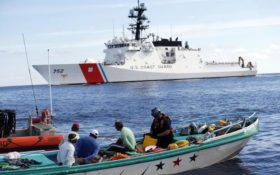 According to a military spokesman, the Coast Guard seized almost over $700 million in cocaine from smugglers attempting to transport the drugs from Central and South America… in a single bust.

The Coast Guard has intercepted over 52,900 pounds of cocaine from traffickers that had an approximate value of $729 million in a single 60-day patrol.

According to the Washington Examiner, “Coast Guard Cutters Venturous, Steadfast, and Alert seized the majority of the cocaine, aided by Hamilton, Tampa, and Mohawk.”

The drug traffickers are originally spotted by military personnel. The personnel then alert the Joint Interagency Task Force-South. The base is located in Key West, Florida and they send a specific boat to respond.

The Joint Interagency Force-South were able to confiscate over 12,000 pounds worth of suspected cocaine that was worth an estimated $188.7 million.

According to a press release, this was the largest cocaine bust ever in one single patrol.

“Low profile go-fast vessels are typically painted to blend with the water and are designed to ride low in the water to reduce their radar signature making them more difficult for law enforcement agencies to detect,” Lt. Cmdr. Dave Ratner, executive officer aboard the St. Petersburg, Fla.,-based CGC Venturous, said in a statement.

Between late June and mid-July, the CGC confiscated an estimated 17,000 pounds worth of cocaine.

Steadfast Cmdr. Alain Balmaceda explained that because of the hardworking of the Coast Guard, eight tons of cocaine will not reach the streets and hundreds of millions of dollars will be denied to criminal organizations.