NBA star was robbed and burglars stole....WHAT!? - The Horn News 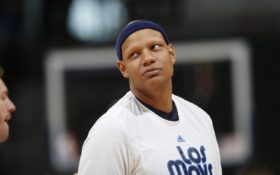 A former NBA player has taken to Twitter to complain that a toilet was among the items stolen from his Dallas home during a burglary.

Thirty-three-year-old Charlie Villanueva, a former first-round pick who most recently played with the Dallas Mavericks, posted a photo of the space in his bathroom where his toilet once stood.

In a series of sometimes potty-mouthed tweets , Villanueva says his home appliances also were taken during the burglary.

Damn my home in Dallas was just burglarized, called the cops and still waiting on @DallasPD to make a report. FYI it’s been 2hrs since I called. #shitiscrazy

They stole my toilet…… I’m not making this shit up. Still waiting @DallasPD pic.twitter.com/Go9BP3itSB

Appliances all gone, like are you serious? This is mind blowing @DallasPD

I’m still tripping, who steals a toilet? Like why a toilet, 1 toilet @DallasPD still not at my house

Villanueva criticized police for a slow response to his burglary report, saying he called four times about the purloined toilet.

Another Twitter user created the handle “Stolen Toilet” and responded to one of his tweets by asking: “Charlie are u looking for me?”