NBA honors legendary scorer (this is a first!) - The Horn News 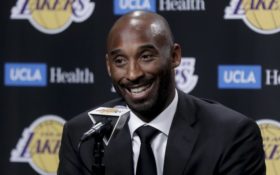 Although Kobe Bryant has been asked many times, he still isn’t sure who would win a mystical game of one-on-one between the young Kobe in his No. 8 Lakers jersey and his older self, who wore No. 24.

“I kind of go back and forth,” Bryant said with a sly grin. “But 8 has something that 24 will never, ever, ever have, and that’s the ability to grow hair.”

The Lakers couldn’t choose, either. So they honored both eras of Kobe’s incredible career.

In an NBA first, the Lakers on Monday night retired both jersey numbers worn by Bryant, the leading scorer in franchise history.

Bryant attended the Lakers’ game against the Golden State Warriors for a halftime ceremony at Staples Center, which was packed with fans eager to bear witness once again to the beloved superstar scorer. Dozens of Bryant’s former teammates showed up, including Shaquille O’Neal and Derek Fisher, along with the Lakers’ usual cavalcade of celebrity fans.

“I feel great,” Bryant said after entering Staples Center while pushing a stroller containing Bianka Bella Bryant, his infant daughter. “I’m very proud I get to come here with my family. It feels good as a father to have my family come in and share this.”

Bryant is the 10th player with a retired jersey for the 16-time NBA champion Lakers. His numbers were revealed high on the Staples Center wall, flanking the banner honoring Lakers broadcaster Chick Hearn.

Magic Johnson and Lakers owner Jeanie Buss gave brief tributes to Bryant at halftime, with Magic boldly declaring, “We’re here to celebrate the greatest who ever wore the purple and gold.”

Buss cleverly explained the reasoning behind the Lakers’ decision to hang two jersey numbers for Bryant: “If you separated each of the accomplishments under those numbers, each of those players would qualify for the Hall of Fame.”

“I thank you for staying loyal to the purple and gold and remaining a Laker for life when it might have been easier for you to leave,” Buss added.

He also was the first player to spend at least 20 seasons with one franchise, and he is widely beloved in Southern California, where he still lives with his family.

“To play his entire career for one organization, in modern sports, it really doesn’t happen very often anymore,” Walton added. “To go through two different championship runs, I think the Lakers are such a huge part of this city that people feel connected to him. … They feel as if they were on that journey with him, with us, and I think that’s why there’s such a connection.”

The Lakers celebrated by closing down the street outside Staples Center and staging a street fair dubbed “Kobeland,” complete with a Ferris wheel and many other games and attractions. Thousands of fans crowded into the downtown streets several hours before the game just to appreciate the atmosphere.

The Lakers typically only retire the numbers of players enshrined in the Hall of Fame. Bryant isn’t eligible until 2021, but the Lakers decided not to wait for that formality — and for Kobe, they doubled up the honor.

Bryant switched jersey numbers halfway through his career, neatly dividing the eras of his 20 years with the Lakers. The No. 8 Bryant won three NBA titles, and the No. 24 Bryant won two more before retiring in 2016 with a stunning 60-point performance in his farewell game against Utah.

When pressed to pick his favorite era of his own career, Bryant reluctantly did it.

“If 8 is playing 24 after he just ruptured his Achilles, then it’s a problem for 24,” Bryant said. “If 24 is playing 8 when he tore his shoulder, it’s a problem for No. 8. so it depends. … It’s really, really tough for me. I think 24 was more challenging, and I tend to gravitate to things that are harder to do, and physically for me, it was really hard to get up night in and night out. It was really a grind.”