Navy SEAL to Clinton: You're an arrogant liar - The Horn News 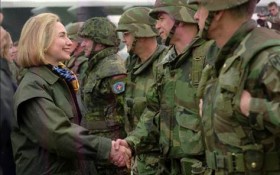 It’s a scandal that cost TV news anchor Brian Williams a job and his reputation. Now could it cost Hillary Clinton the presidency?

In a speech to supporters, Clinton claimed she “remember[s] landing under sniper fire,” during a trip to Bosnia in 1996 as first lady.

“There was supposed to be some kind of a greeting ceremony at the airport but instead we just ran with our heads down to get into the vehicle to get to our base. It was a moment of great pride for me.”

But as former Navy SEAL Dom Raso has long pointed out, it was all a lie meant to make Clinton look tough.

Video footage proves that instead of gunfire, Clinton was greeted with hugs from young children and handshakes with local leaders when she arrived in Bosnia. But instead of apologizing, Clinton since has tried to rework her lies as a simple “mistake” and a “misstatement.”

Clinton’s lies are reminiscent of a scandal that ensnared TV anchor Brian Williams last year, when he was caught falsely claiming to have come under fire in Iraq.

Raso has long been vocally criticizing Clinton for her claims, which he says are disrespectful to American troops who face gunfire regularly. And with the 2016 presidential election looming, Raso is making a fresh round of media appearances to make sure the public doesn’t forget.

In one video, Raso sends a message to US citizens, saying, “I want to make sure you don’t lose sight of [a] liar who thinks she can use the heroism of our nation’s armed forces to promote herself as our nation’s next Commander-in-Chief.”

“Only someone completely arrogant, ignorant and disrespectful of what happens in war could say something like that,” Raso added.

He goes on to blast Clinton, saying she “was willing to lie in order to take advantage of that feeling of gratitude and awe Americans have for those who serve.”