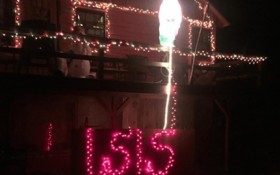 Deputies paid a visit to a southern Maine home after its owner’s raunchy anti-terrorist Christmas light display was misconstrued as support for the Islamic State group.

The Portland Press Herald reports the homeowner, who wasn’t identified, used lights to spell out the word “ISIS” on a board below the deck of the home in Limerick.

York County Sheriff William King says that was all a concerned resident saw when he notified the office of a potential “ISIS sympathizer.”

What he didn’t see, however, was the illuminated plastic Santa Claus placed atop the deck that appeared to be urinating on the word ISIS via a strand of white lights.

King says no laws were broken and the homeowner will rearrange the lights to “clear up any doubts about his message.”