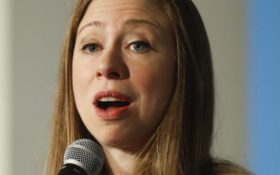 Former first daughter Chelsea Clinton’s public career has been filled with controversial statements and political theater — but on Saturday she sank to a disgusting new low.

What she said was so vile, it’s not an exaggeration to compare it to one of the nastiest statements in the Democratic Party’s history.

Chelsea claimed that the 1973 Roe v. Wade Supreme Court decision, which legalized abortion, was too valuable to the United States economy to revoke because killing babies is helping make Americans rich.

As the speaker of the “Rise Up for Roe” event, Chelsea boasted that dead children have added “three-and-a-half trillion dollars to our economy” because abortions let expecting mothers remain in the workforce.

The event was held by the Planned Parenthood Action Fund, NARAL Pro-Choice America, and the Demand Justice Initiative to help oppose the nomination of Judge Brett Kavanaugh to fill Justice Anthony Kennedy’s vacant seat on the Supreme Court.

“It is not a disconnected fact … that American women entering the labor force from 1973 to 2009 added three and a half trillion dollars to our economy. Right?” Chelsea asked the stunned audience. “The net [from the] new entrance of women? That is not disconnected from the fact that Roe became the law of the land in January of 1973. Thus, no matter what other things Americans may care about, everyone should appreciate the economic value of legalized abortion.”

“So, I think, whatever it is that people say they care about, I think that you can connect to this issue,” Chelsea concluded. “Of course, I would hope that they would care about our equal rights and dignity to make our own choices. But, if that is not sufficiently persuasive, hopefully … [the economy] will be.”

In other words, Chelsea isn’t interested in the moral arguments that killing unborn babies is wrong.

Instead, she wants to convince people to keep abortion legal… because she says it’s adding to our bottom line.

As if there was anything left the Clinton family wouldn’t do for cash, now Chelsea says that the profits from dead babies are just too lucrative an industry to give up?

In many ways, it’s a similar argument Democrats made against the ending of slavery in the 1860s. As a way to counter the Republican moral argument that all men are created equal under God, Democrats would argue that their slave-driven agricultural businesses were too valuable to the economy to give up.

Is it even possible for the Democrats to sink lower than this?